Basketball's not the thing here, but new NBA Commissioner Adam Silver has twice been in the general news, this week for a touching tribute to a basketball career cut short by Marfan's Syndrome.

It it interesting that by the paper's standards, Silver is also an example of a "loser." 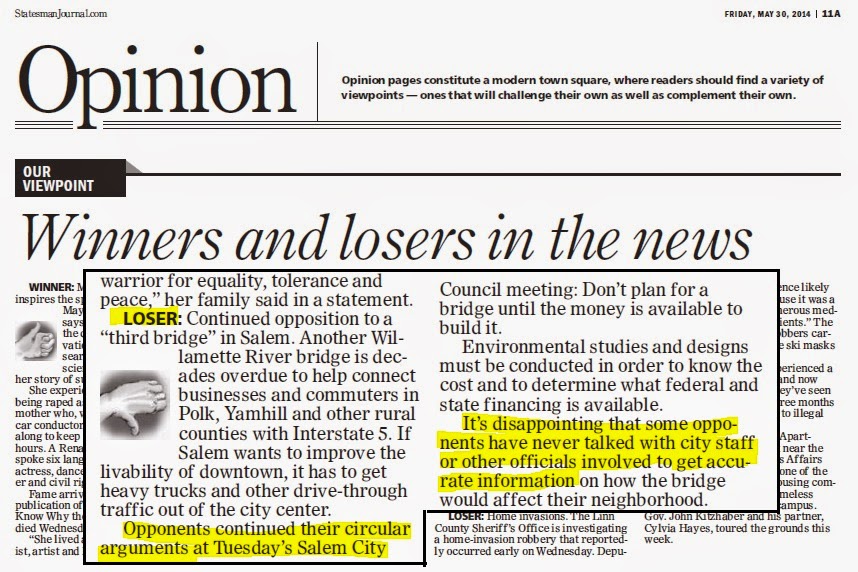 From a Sports Illustrated profile:


In 1965 famed New York City developer Robert Moses announced plans to build a bridge connecting Long Island and Westchester. The bridge would run from Oyster Bay to Rye. Melba Silver would not have been directly affected. Her house was nowhere near the proposed entrance. But Melba was an environmentalist who hosted fund-raisers for progressive political candidates. She was concerned about the effects of pollution on her children and her hometown. She started a campaign called Ban the Bridge. Her youngest son, Adam, wore BAN THE BRIDGE buttons to elementary school. He saw his mom on TV, and he rejoiced with his family when plans for the bridge were scuttled.

What kind of oversight would put a giant bridge and highway in a known liquefaction zone?

All of them offer provocative, if imperfect, parallels with the Salem River Crossing foolishness.

The Pioneer Mountain - Eddyville Highway 20 project is notable because they had to blow up a brand-new bridge and pretty much start over because of unstable soils.

That project also has a cost overrun of at least 100%.

The Salem Alternative is also positioned over unstable soils, with the risk not so much from active landslides as from liquefaction in a big seismic event - which we all know is meaningfully likely in our lifetimes and a near certainty in the expected lifetime of a new bridge.

But, hey, let's pick a design! Shiny, fun! (N3B has more here and here on the meeting. One or more workshops on "funding" look to be on the docket for early fall, and it will be interesting to see how seriously that topic gets engaged.) 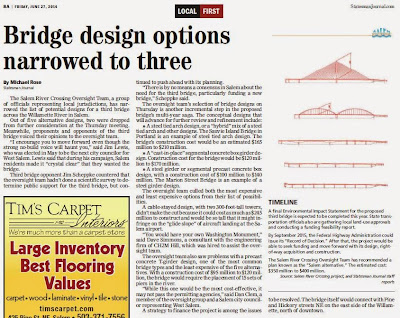