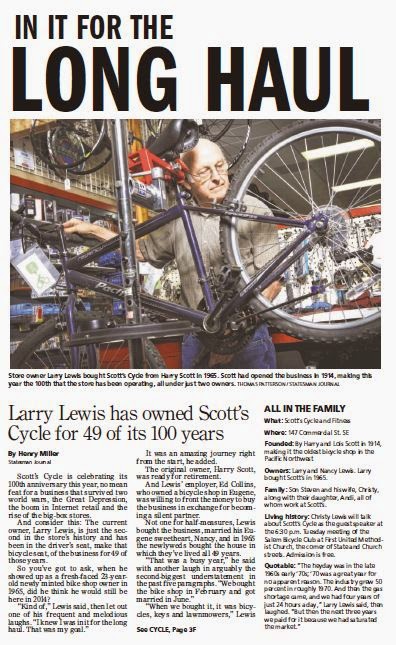 
Scott's Cycle is celebrating its 100th anniversary this year, no mean feat for a business that survived two world wars, the Great Depression, the boom in Internet retail and the rise of the big-box stores.

And consider this: The current owner, Larry Lewis, is just the second in the store's history and has been in the driver's seat, make that bicycle seat, of the business for 49 of those years.

This history will be the featured topic at the Salem Bicycle Club's meeting this week!

The program will feature Christy Lewis from Scott's Cycle who will talk about the shop's 100 years in business -- the most in the Northwest. The meeting will be at the First United Methodist Church at the corner of State and Church Streets. Social time starts at 6:30 p.m. and the meeting starts at 7:00 p.m.

For more on Scott's see some early history here and more on the 50th anniversary here. 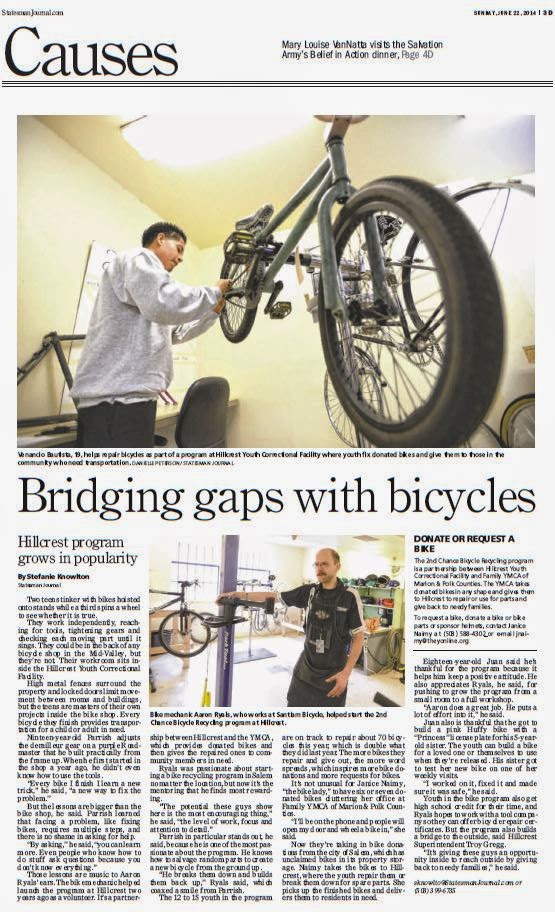 
Two teens tinker with bikes hoisted onto stands while a third spins a wheel to see whether it is true.

They work independently, reaching for tools, tightening gears and checking each moving part until it sings. They could be in the back of any bicycle shop in the Mid-Valley, but they're not. Their workroom sits inside the Hillcrest Youth Correctional Facility.

High metal fences surround the property and locked doors limit movement between rooms and buildings, but the teens are masters of their own projects inside the bike shop. Every bicycle they finish provides transportation for a child or adult in need.

Doh! Missed the South Salem Cycleworks recycling ad right next to the continuation on p.3 of the Scott's piece. Nice to see "transportation" and not just recreation called out!