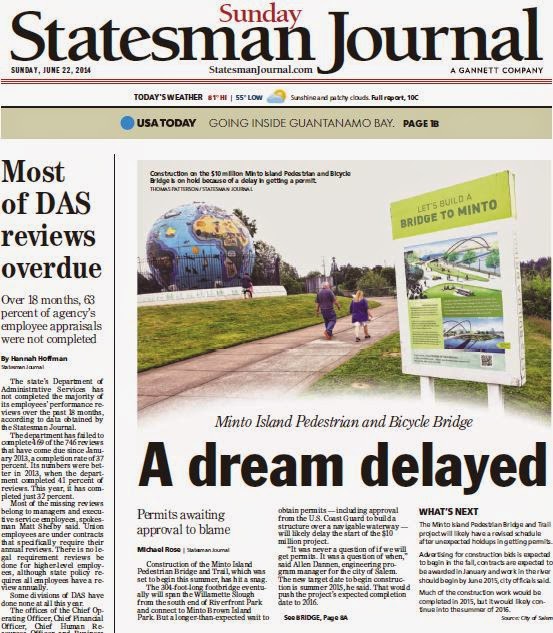 Council meets today, and on Sunday a substantial update on delay with the Minto Bridge got the headlines.


Project permitting, however, has not progressed at the rate anticipated in the June 2013 schedule. Several federal, state, and local approvals are required for the Project, including permits from the U.S. Coast Guard, U.S. Army Corps of Engineers, and the Federal Highway Administration. These approvals are required before the City can advertise for and select a contractor to begin construction work. To date, 14 of the 15 necessary permits and approvals have been received. The remaining permit, from the U.S. Coast Guard, is expected by early August. This is too late to allow for construction to occur during the allowable in-water work period for 2014. The City will determine the exact bid schedule when the U.S. Coast Guard permit is received. More competitive pricing from construction contractors is expected if the City advertises for construction bids in the final quarter of 2014.... 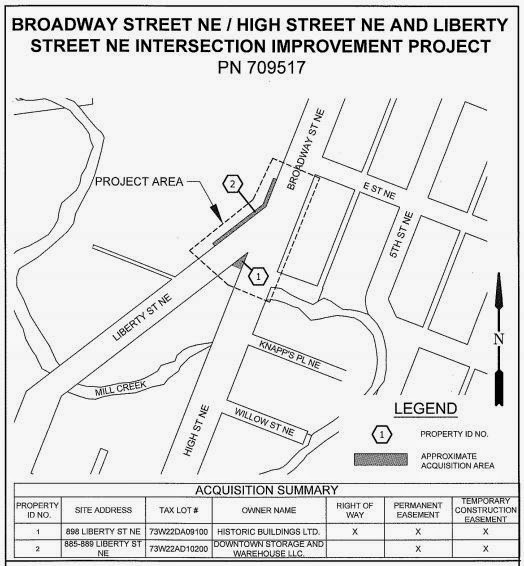 A year and a half ago or so, there was a rumor about the prospect of a traffic circle at the triangular intersection of Liberty/High/Broadway. Contracts hadn't been awarded yet and folks weren't able formally to confirm anything.

At Council is a report about declaring a need for right-of-way at the intersection, and it looks like the traffic circle may be moving forward. Staff weren't able to confirm a traffic circle on Friday, so hopefully on Monday we can update the post.

A well-designed traffic circle could help circulation for people on foot, on bike, and in car here. This will be interesting to learn more about!

The Summer paving budget offers a 9% reduction in road maintenance from last year. The report also contains information about the on-going funding gap:  "Funding street maintenance at an ideal level would require $8.0 million per year, compared to the $1.9 million budgeted for FY 2014-15. The funding gap for on-going pavement maintenance was reflected in the need to allocate $15.6 million, or 16 percent, of the 2008 Streets and Bridges Bond Measure funds to dedicated street pavement rehabilitation and reconstruction projects."

City Staff will present a brief memo saying that the idea of turning the Library into the Police Station is "likely not economically feasible." (For more on why it could have been a great opportunity to upgrade the library with better access and better facilities, see here.)

The recent criticism of the city has stemmed from two clear problems: !) how the public process is conducted; and 2) how well qualified the staff seems to be on the issue.

Several issues lately have demonstrated that the staff has not been well prepared to handle the task they have been assigned. I do not know if it is the planning staff, public works staff, or the management staff that is to blame, but it is not good when a project gets all the way to the City Council level to find out that you overlooked a necessary step ( i.e. the need to get federal permission to place a roadway in a park). It makes everyone at the city including the council look bad, and it waste a tremendous amount of money and time. Not to mention it sometimes costs the whole project.

The question about can we use the library for the police was not a bad question, but how it was handled was. A few months ago the idea was floated and Chief Moore said that he did not think the building could be converted because of the special requirements of such facilities for earthquakes. Apparently the staff handling the project, nor the City Manager knew what those standards are. They should have. Previous City Managers seem to have been much more informed about such details, and or had staff on hand who did. If the staff person who is handling the project did not have the technical expertise to answer questions at a work session, then they should have asked someone who had those skills to be at the meeting. Having to hold a second work session and then to wait weeks for an answer caused people to have time to get upset. Again, the answer was simple and the project gets needlessly delayed.

The second issue is how the public is involved in issues. Sometimes it is better to take an idea out to a group of experts before you get too far down the road.

The City has been working on a sign code update. This to accommodate drive thru businesses who are required to post more information on their signs. To do this they say they need bigger signs. So, instead of doing their homework and then taking it to the neighborhood land use chairs (oh, wait, the City decided to not fund having a staff person work with those people anymore) to see what issues might need to be considered. They drafted something then put it out for comment, but ran into objections. Then they rewrote it and come back with something they thought was ok, only to find out that they did not consult enough of the businesses affected by the new code, so back they go again. The City has been working on trying to get one simple code done for over a year!

Hoping that bridge to Minto gets built before I'm too old to bike on it.