Just in time for summer, the brewers at Salem Ale Works have announced they've got a new bike rack!

It went in maybe a month ago, and that's great news - because what's better than a frosty beer on a hot summer's day?! (Now if we could just modernize 25th street!)

It was also nice to see a piece today on the summer crosswalk enforcement activities, but the tone still tilts to view people on foot as the interlopers in the street, which more naturally belongs to people in cars. 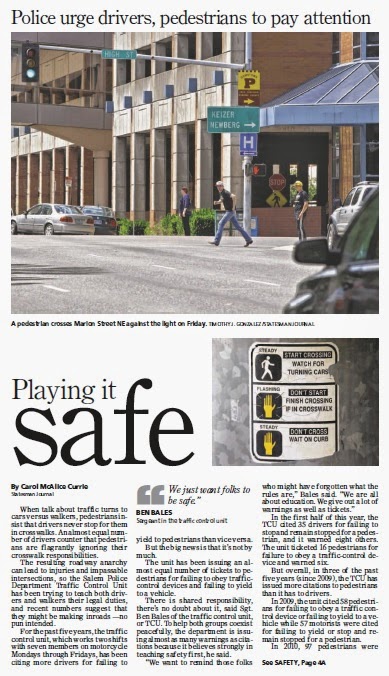 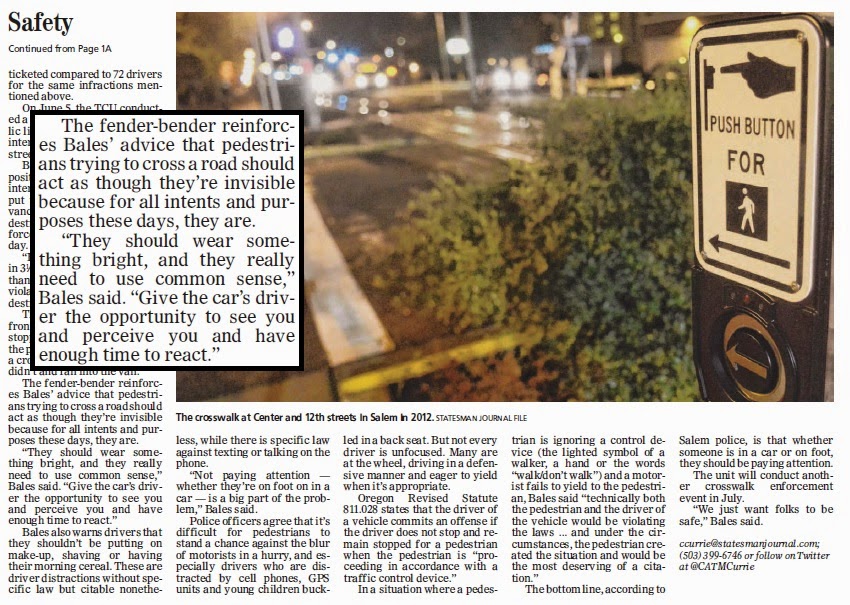 More concerning is a hint of blame the victim: "...pedestrians trying to cross a road should act as thought they're invisible...They should wear something bright."

Come on, are we really gonna go down this path where we ask people on foot to be walking traffic cones, as if they were hazards drivers have to avoid? Where they have "to try" to cross rather than enjoy the expectation they can and deserve to cross? There's a weird switching where there's too much pseudo-Darwinianism here with cars as the apex predator and humans on foot the wary prey and urban deer who need to stay out of the way - and a concurrent sense that drivers are the vulnerable party, that pedestrians are killing people in cars.

The way we talk about road safety right now is incoherent.

And there's that tone of false equivalence:


When talk about traffic turns to cars versus walkers, pedestrians insist that motorists never stop for them in crosswalks. An almost equal number of drivers counter that pedestrians are flagrantly ignoring their crosswalk responsibilities.

The resulting roadway anarchy can lead to injuries and impassable intersections, so the Salem Police Department Traffic Control Unit has been trying to teach both drivers and walkers their legal duties, and recent numbers suggest that they might be making inroads —no pun intended.

For the past five years, the traffic control unit, which works two shifts with seven members on motorcycle Mondays through Fridays, has been citing more drivers for failing to yield to pedestrians than vice versa.

But the big news is that it's not by much.

The unit has been issuing an almost equal number of tickets to pedestrians for failing to obey traffic-control devices and failing to yield to a vehicle.

Cars, speeds, and over-engineered roads are the problem, not people on foot. The roads are for all users, including people on foot, and there was an opportunity here for a forceful statement that cars are dangerous and drivers must stop for people in crosswalks.

If an activity is dangerous, we should do less of it. If we are serious about traffic safety, the best thing to do is to drive less and to make it easy for others to choose to drive less.
Posted by Salem Breakfast on Bikes at 12:01 PM

While I agree that sometimes people try to blame the victim in a pedestrian/car accident, I have to say that more than once lately I have been surprised by someone darting out across the street at night wearing all black. You just do not see them until they are directly in your headlights. I guess what people figure is that if they can see you, you can see them....but that is so not true!

Also, we bought a new car about a year ago and I was shocked and upset to figure out after we started to drive it as to how hard it is to see out of. Newer cars have more reinforcement for impact safety than cars from just a few years ago. This means that all of the four corners of the supports for the roof are wider. Also the mirrors are bigger. So what this has done is made the area where a person walking or riding near a car are less visible.

One day I was turning at Lancaster Mall and did not see anyone in the crosswalk...until that person was right in front of my headlights. She had been walking at the same pace that I was turning apparently, so she was constantly in that blind spot. Luckily, I was able to stop in time not to hit her, but it sure was a shock.

So, now I understand why they are putting cameras in the rear, but also, I realize that driving in a newer car is a whole new way of driving. You have to rely on side mirrors more and often it takes two people to make sure you are seeing actions taking place around the car.

So, it is wise for pedestrians to be more mindful. And please, people, you just got to stop looking at your cell phone when crossing the street...even if you have the right away or are in a crosswalk.

Both parties need to be more careful and aware!

Re: "darting out across the street at night wearing all black" -

Totally agree. People on foot and on bike are effectively invisible at night and do have to take different measures.

But the pedestrian enforcement actions by the police are during the day, and in those circumstances it is unreasonable to insist they be "traffic cones" or that they practice a cringing, defensive posture to ward off crashes. That's the beef here.

But yeah, walkers who look at cel phones rather than the street or sidewalk - except for the fact they aren't traveling at a lethal speed and a lethal weight, it's distraction almost as bad.

Lancaster is just a charlie foxtrot all the way around.

I'm a frequent pedestrian, year-round, and I *always* wear a light colored jacket. It's just too dangerous out there generally, and, on a dark rainy night, I know nobody--and I mean nobody--could see me in the ubiquitous black or denim uniform, even if they were paying attention. I also carry an enormous bright yellow umbrella that I've been told is visible in daylight from 2 miles away. It can't help but help at night, too.

RE: the bike rack. I think I know who made it, how about a shout out for the metal artist?

I recently spent a few weeks in Boston where at many intersections pushing a pedestrian button stops traffic in all directions eliminating the turning car vs pedestrian problem. Would love to see that here especially in the diabolical dual right turn lanes.