No Third Bridge to Rally Before Wednesday Transportation Open House

Tomorrow at 4pm on Wednesday the 11th, No Third Bridge will hold a rally in conjunction with the dual Open House for the Salem River Crossing and Salem-Keizer Area Transportation Study.

In addition to the festivities and "information" about the Salem Alternative and progress on the Environmental Impact Statement, there will also be information about the 2015-2020 Transportation Improvement Program.

There's also a handy website with a full list and some other features. (You can read commentary from April here, as well as a slightly different way of looking at bike/ped projects, some of which use bike lanes and sidewalks as a way to facilitate road widening, and from here don't really qualify as primarily bike/ped projects.)

While the bridge deserves nearly endless criticism, there are other good and necessary and even wonderful things in the project list - like the intersection work for Union and Commercial, which will complete a critical gap in the eastside approach to the Union Street Railroad Bridge and a future Union Street bikeway. (So be open to dual perspectives! It's necessary to be cranky and cheerful in rapid succession.)

One project with new detail is the Doaks Ferry realignment at Highway 22. Maybe you saw the piece in the paper yesterday. 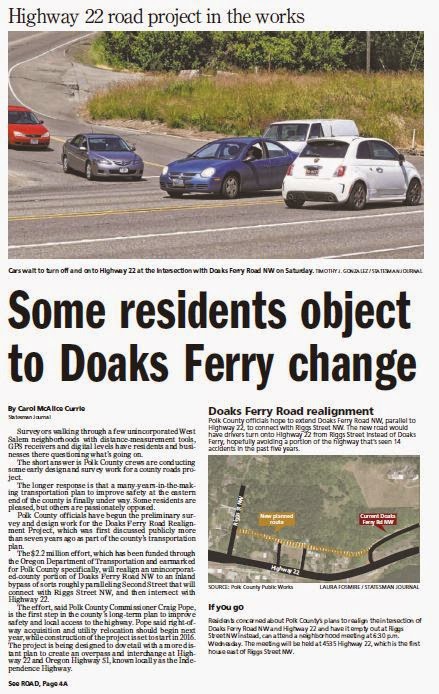 The new alignment will go through the old town of Eola/Cincinnati. 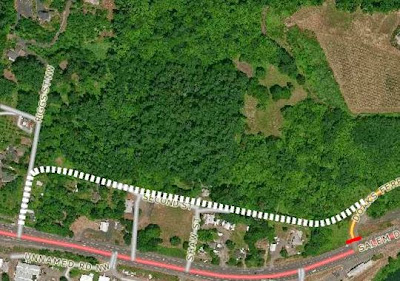 If you haven't biked through Eola, take a moment to do so, because it will be changed. The old streetgrid is a reminder of another era.

(Also in history, in a window display on Court Street, fronting the Senator Hearing Room, I think, there's a nice historical piece on the Derby Building and its growth into the Senator Hotel - which was demolished for Courthouse Square. There are pictures from each decade or so showing the storefronts and streets.)
Posted by Salem Breakfast on Bikes at 7:00 AM

Thank you for spreading information about the Draft 2015-2020 Transportation Improvement Program and the website that was created to inform the public about projects in the TIP. However, I am a little concerned that your picture of the TIP brochure that has been altered to show the No on Third Bridge on the cover is very misleading. Could you clarify that the brochure has been altered? I don't want anyone to be confused that it is representative of the actual brochure or TIP documents. Thank you.

That's a GREAT comment that reveals volumes about what the planners think of the intelligence of the people in this area. Perfect.