Whether it was merely in passing or was part of an assignment, at least one reporter tweeted about yesterday's rally.

Interestingly, though, it was a project about 2% the size of the giant bridge and highway that got the front page treatment today. 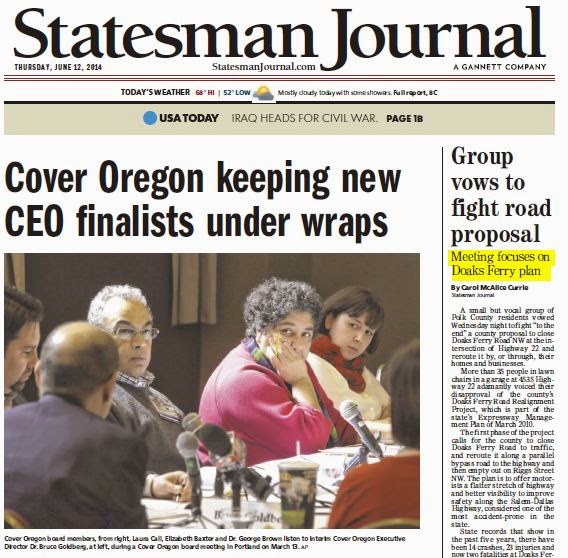 I think they picked the wrong rally!

Of course the problems are related, and the proposed solutions participate in the same car-logic: It's all about faster travel. Rather than accepting slower speeds, we have to engineer things to maintain or increase speeds and through-put and to engineer things in a way that "forgives" driver error, which includes speeding or errant turning.

The crash was at the Doaks Ferry intersection, though the cars ended up in the restaurant parking lot and it's not clear that any of the impacted drivers were trying to turn on to Doaks Ferry. Still, with Highway 22 here as one of our worst "stroads," a dangerous hybrid of local street and high-capacity through-road, there are multiple factors that contribute to crashes. (Those who perished were 90 and 91, and it's also possible that slowed reaction times contributed. Our weak transit system also fails seniors as a strong alternative to driving.)

Here's the bottom line:  The ways the City institutionally talked about the Old City Hall circa 1970 maps to the way the Hospital institutionally is talking about Howard Hall today.

Same sense of longing and loss and regret.

City Hall was a flawed, leaky, chunky building, no paragon of romanesque, but we still miss it terribly. Howard Hall might be minor Bennes, and a small piece of the Blind School, but we will also miss it.

If our historic preservation code still allows us to demolish buildings like this so cavalierly, if the Hospital can so easily meet the criteria, then we need to consider additional changes to the legal framework. This is not right.

Oh boy. Here might be another one. From the Keizer Times


Sam Litke, senior planner with the City of Keizer, said the 120 units would go on 7.5 acres of land along Verda Lane NE.

“It would go from the four-way stop (at Verda and Chemawa Road NE) to Dearborn Avenue,” Litke said. “It would be on the west side of the road.”

In other words, the apartments would go in the area affectionally long referred to as the cow park, since a number of cows hang out in the area just east of Claggett Creek Park.

The "cow park" is the back pasture, I believe, for the circa 1870s John Pugh house, which operated as a dairy mid-century. The Pugh family were important early settlers of Keizer, arriving in 1845, and were involved in the formation of the first school district as well as designing the Old City Hall building and the Grand Theater.

Many designs for an apartment complex here could require the demolition of the house. (Apartments themselves here are not necessarily a bad thing, it should be noted.)

Keizer History has also collected more images and written about the house.

There's not enough information here to have a firm opinion about anything, but this is something to watch.

MOAR PARKING! (It's a Crusade)

And it's not just the Hospital. 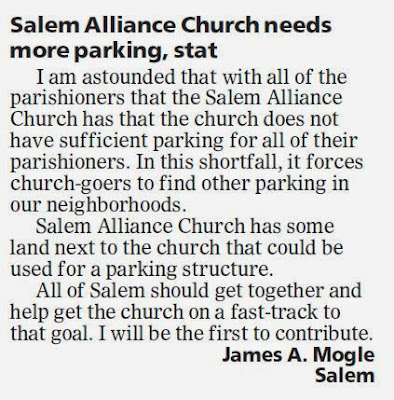 Managing this, and avoiding the need to build more parking, was an important part of the North Broadway study, but that study seems to be on the shelf right now.

And here's something good and right. Let's see more of this hyper-local environmental coverage! 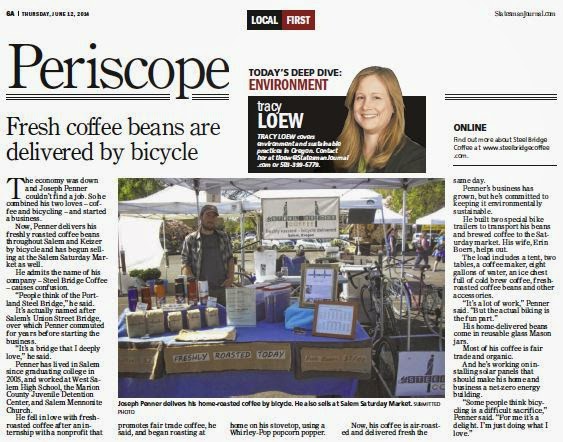 Briefly...ODOT announced final rankings on the lottery funded ConnectOregon V programming. These will go to the OTC for final approval. While it is possible there could be changes on the final list, it is not very likely. 4 Bike/Ped projects got recommended for 17% of the total funding of $42 million. Aviation only got 15% and Transit 8%, so it's hard to argue that the there's any great overall disproportion.

Significantly, no Salem project was recommended. The top 37 projects are on the recommended list. The South Salem Transit Center was #50, the Kroc path was #55, and the Bike P0ds #76. 104 projects total were ranked.
Posted by Salem Breakfast on Bikes at 12:30 PM

Michael Rose of the Statesman tweets that the HLC denied the demolition request.

David 6. Goliath 0. Sure to be appealed. On to city council. #nosuchthingasfreeparking