Did you see the profile of "Bicycling" Bob H. Reinhardt, the recently appointed Director at Mission Mill?! 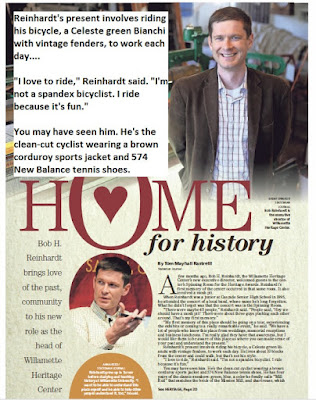 There are many reasons to find it interesting, not least the conversation about future programming at the Heritage Center.

But it's also remarkable that the bike commute is a significant detail worth comment - but mainly in passing, and not as a freak show, outlier, or grand or heroic gesture unavailable to ordinary folks.

It's a small and sensible commute decision, one based on "fun" and proximity to home -  and even a little banal.

That's a moment to cheer in the mainstreaming of bicycling and the way it's handled in the press.

Thanks, Bob and Tom!

However...at another Salem institution, there is sad and unsurprising news. The giant parking lot at the former Blind School property has claimed another loss. 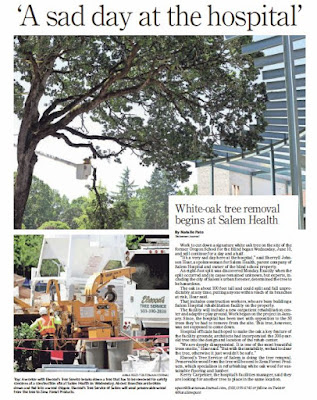 Somehow, as its roots and soil and canopy were altered by construction activities, one of the large oaks developed fatal health problems. It might not be possible to find direct causation - but really, the coincidence is very suspicious indeed.

The Hospital's plans did feature the tree. I think they did want to save it and I don't think that they intended for construction to kill it. There's no conspiracy here.

But it should surprise no one that the parking lot and associated buildings were not planned in a way deeply sensitive to the existing ecosystem. The site plan was "imposed" on the site, not developed in tandem with it in an organic way. This is a failure of siting and of landscape architecture.

And again, it's all driven by cars, by the vast parking lot.

Keyed to the waning days of the Legislature, Transportation For America has a press release and somewhat new report out. 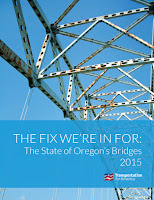 
OREGON – A new Transportation for America report analyzes the condition of Oregon’s bridges and finds that 439 are structurally deficient — requiring urgent repair, rehabilitation or replacement.

These bridges are located in areas urban and rural and serve as critical links in moving people to work and goods to market each day. In 2014, Oregon drivers took 1,000 trips per minute over these deficient bridges. Compared to other states, Oregon has done a better keeping their bridges repaired, but 439 structurally deficient bridges is still far too many, and without continuing to prioritize and fund their repair, progress could even slow or reverse course.

Most bridges are designed with a 50-year lifespan, but these structurally deficient bridges are an average of 55 years old, 14 years older than the average age of all Oregon bridges. One in twelve bridges were built before 1948, which means that 680 bridges have been carrying traffic since before the Korean War and the creation of Medicare.

“Federal and state transportation funding simply hasn’t kept up due to declining gas tax revenues, inflation and improved vehicle fuel efficiency,” said T4America director James Corless. “With action by the legislature, Oregon could join a growing list of states — 20 and counting — that have raised their own transportation revenues since 2012. While increasing state funding is a good step, Congress needs to reward those efforts by fulfilling the historic federal role as a trusted partner in transportation investment and passing a long-term transportation bill with stable, increased funding. Doing so would allow the State of Oregon and local officials to better address these sorts of ongoing maintenance needs.”

You know the deal. As we've pointed out, the Marion Street Bridge is one of the "structurally deficient" bridges, and it needs both regular repair and a seismic retrofit. That should be the priority, not a new "Third Bridge."

Other deficient bridges in Salem?
If we're gonna do bridges, we need to consider these first - the earthquake is totally going to isolate the Hospital because of our creeks and newly impassable bridges.

We really need to figure out a way to integrate disaster risk management (and that includes climate change) into our transportation planning. As the "disaster relief trials"show, bikes are very useful on roads compromised by disaster.

The full report from T4America is here.

In a very interesting note just posted today, N3B suggests there is a meaningful chance that McClane Island is a culturally important Kalapuya site:


[A]nother concern to Oregon State Parks and the Grand Ronde tribes and other tribes is the possibility that McLane Island was a cultural site for native people. It could have been the site of a village or even a burial ground. The Columbia River has several islands that were used as burial grounds...[for example]

To their credit, State Parks and the tribes are requiring that this be investigated. NO 3rd Bridge has learned from State Archeologist Dennis Griffin that in August core samples will be taken on McLane island from below the flood sediment on the surface to try to discover if any cultural materials can be found.

So that's another delay, and another potentially fatal finding for the prospect of a giant bridge and highway.

And not at all about bikes or Salem, but about one of our greatest practitioners of everyday beauty, this obituary:

His typeface designs are everywhere you look. Hermann Zapf has died at 96 http://t.co/E0oEEdIlUv pic.twitter.com/CFq9GoW2i6
— The New York Times (@nytimes) June 10, 2015

The City sent out a press release today about larger road construction projects, and it turns out some work on the High Street Bridge at Mill Creek, one of the "structurally deficient" bridges, is included:

Extensive repairs will be made on the High Street NE Bridge over Mill Creek, another bridge damaged in the January 2012 flood, Martin said.

The $700,000 project is funded with a combination of Federal Highway Administration funds and savings from the 2008 Streets and Bridges Bond. Work crews will fill holes under the bridge abutments and foundations, as well as making other improvements to protect the structure.

Construction starts July and continues through November. High Street will remain open during construction, but periodic lane closures will begin in July."

In the weekly winners and losers, even the SJ says "boo!" about the tree:

"LOSER: Salem Health. It provides excellent health care but stumbles on community relations. The latest incident is the demise of a signature white oak on the former campus of the Oregon School for the Blind. Salem Hospital intended to keep the tree as the centerpiece of a rehabilitation center being built on the site. But this week the tree was cut down after it developed an eight-foot vertical split, and arborists said they could not guarantee that the tree could be mended safely.

The tree’s demise might have nothing to do with the construction around it. There might have been no way to save it. But hospital officials left themselves open for secondguessing by refusing local residents’ request to have an outside, independent arborist inspect the construction earlier this year.

Oregonians care passionately about trees. They are as much a part of our cultural DNA as salmon, mountains and the coast. As the property owner, Salem Health had the legal right to cut down this oak and many other trees. However, by coming across as imperious instead of collaborative, Salem Health wounded its community image and likely increased community pressure for a stronger tree ordinance in Salem."

But it is odd that "increased community pressure for a stronger tree ordinance" is seemingly implied to be a bad thing.