I can think of all kinds of things for which it would be worth trading a repeal of the low-carbon "clean fuels" legislation.

House Bill 2281 with proposed amendments wasn't that at all. (See below for update; verb tenses have been edited throughout.)

The proposed "transportation package" in HB 2281 was mini-me to the DRIVE act at the Federal level, a mostly retrograde act focusing on highway expansion and hydraulic autoism rather than safety, mobility choice, and reduced carbon emissions.

Worth pointing out this package: https://t.co/wqGWkZ0FPw does not appear to dedicate one single dollar to bike/ped, save 1% bike bill $.
— Gerik Kransky (@gerikkransky) June 24, 2015

The named projects to be funded with bonds in region 2 were all big highway expansion: 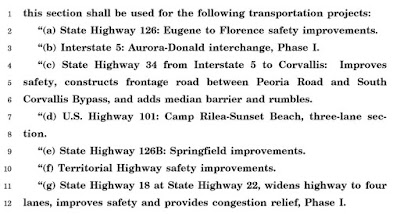 The annual funding for non-specified projects was not that large. How far would $20 million a year go towards seismic stabilization of our bridges? Not very.

Interestingly, it does appear to move ConnectOregon from lottery and video poker money to gas tax money.

Most of the debate centers on the low-carbon/clean fuels repeal, but the more interesting question is how the proposal looks at the transportation system in whole. And the answer is short: business as usual, but with minor tweaks on the edges.

It didn't really address the problems of earthquake, deferred maintenance, and building out a system meaningfully less dependent on drive-alone trips, and didn't dig in very far on carbon, either.

(It doesn't seem worth more detailed analysis, so as others weigh in, perhaps this post will be updated.)

Missed BikePortland's take. They read the ConnectOregon bit as implying that it will continue to rely on lottery and video poker monies, so perhaps I misread that part.

updated with link to story from Oregonian on package's demise