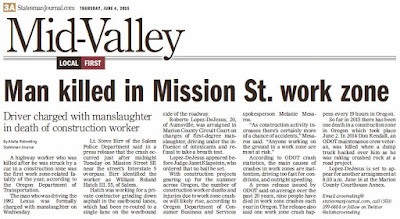 This is terrible. Late Monday night an impaired driver killed another person on foot in or near an urban highway. Travis Lane you may recall was killed two weeks ago on a different urban highway.

Just past midnight, very early on Tuesday morning, William Hatch III was killed while working in a construction zone on Mission Street.


Roberto Lopez-DeJesus, 20, of Aumsville was arraigned Wednesday on charges of first-degree manslaughter, driving under the influence of intoxicants and refusal to take a breath test.

Lopez-DeJesus appeared before Judge Janet Klapstein who ordered that no bail be set according to court documents.

Lt. Steve Birr of the Salem Police Department said in a press release that the crash occurred just after midnight on Mission Street SE near the street's Interstate 5 overpass when an eastbound 1992 Lexus struck the worker.


When we choose urban street design speed, we choose how many peds it's OK to kill in a crash http://t.co/lletYPL1Oi pic.twitter.com/LDdcQUt8tO
— Jeffrey Tumlin (@jeffreytumlin) April 7, 2015


Even with traffic cones, detouring, and signage in a construction zone, Mission Street here is very wide, and the visual cues, as well as the adjacent posted speeds outside of the construction zone, are all for high speeds. The road-engineering and design multiplies the likelihood of fatality and catastrophe from the original problem and crime of a driver choosing to drive drunk. Zoomy hydraulic autoism isn't the primary cause here, but it's a contributing factor.

(You may recall that a driver blew a red light and killed Connor Jordan in a crosswalk on this same stretch of Mission Street near I-5 in July of 2012.)

It also should be noted that the traffic cone theory of walking wasn't sufficient to protect Hatch against high speed and an impaired driver. If construction zones and high-viz apparel don't protect people on foot, why do we suggest this for walking in neighborhoods? Maybe this is evidence that the greater burden for safety really does belong on the driver and not on the person on foot. 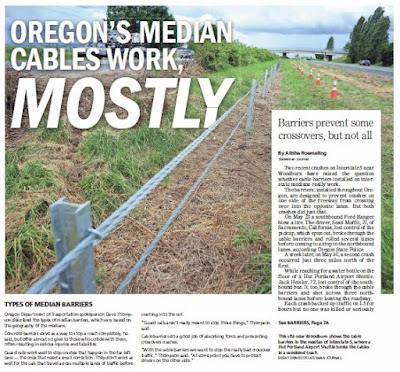 Separately, there is a story about the effectiveness of cable barriers on I-5.

Driving on an access-controlled interstate is a different animal, and not something we go into very far here. But the important point is that if cable barriers are only "mostly" useful on the interstate, why do we permit highway speeds, and design roads for those same speeds, inside the city limits on stroads or other urban highway segments that are not actually interstates and where there are likely to be people on foot and on bike? If cable barriers can't fully protect users of the interstate already armored in cars, why are crosswalks and orange cones sufficient for more vulnerable people on foot in places with highway speeds like Mission Street, the Parkway, and Kuebler?

Speed is a huge problem, and our solution is not to seek to reduce speeds in systematic ways, but instead to try to accommodate higher speeds and freer-flowing traffic. We have it all backwards.

Both of the deaths involved drivers who made catastrophic individual decisions to drive while impaired. But our urban highways compound the mistakes with fatal speeds.
Posted by Salem Breakfast on Bikes at 12:01 PM

Today (thursday) I was biking home from Salem to Keizer with my kids. Normally people are very courteous. But today I got cut off three times by idiot impatient drivers. Each time I had the right of way and each time they couldn't wait 10 seconds.

This is a very enlightening take on things. So much attention is being paid on the drunk drivers and the victims, but not a lot on the road itself and how the traffic flow is being engineered. Yes, it is a bit odd that high speeds are being tolerated amidst the numerous incidents of accidents in that particular area. Though I also agree that this hazard could also be avoided if people would practice responsible driving at all times. Anyway, thanks for sharing your thoughts on the matter.

News on the sentencing:

"An Aumsville man was sentenced to eight years in prison for second-degree manslaughter after the car he was driving struck and killed a construction worker last summer.

The manslaughter charge was lessened by a degree, refusal to take a breath test was dropped and the reckless endangerment charges were added, according to court records.

Judge Courtland Geyer gave Lopez-DeJesus a one-year sentence for each of the other convictions, which will be served concurrently.

Lopez-DeJesus' driver's license has also been revoked, according to court records."