Apartments for old Cannery Site at Hearings Officer Next Week

There's another proposed apartment complex at the Hearings Officer next week, and while the apartments themselves doesn't appear to be anything special, the site it turns out is another old Salem cannery.

The disputed plaque at the Hospital's Everson House is also on the agenda, but there's not anything new to say there. The Staff Report for the City is very brief and finds little of substance for response. It will be surprising to see that decision altered, though the City did errantly close off the written record prematurely. (See previous discussion for more.)

The apartments are much more interesting, not really in themselves, but because of the history of the site at Liberty, an old-time community south of town. That's Roy Ohmart's Liberty Store on the right side of the 1915 image.

The developer wants to put in a 93 unit apartment complex on four lots of land that is currently zoned for "Retail Commercial" just off of Liberty and Skyline. Apartments are allowed in this retail zone, but only as a conditional use, so that requires a "conditional use permit." There is also one lot that is zoned for "Neighborhood Commercial" and here the zoning needs to be changed to allow for apartments. (Update: This description isn't quite right. See comment below for a clarification from City Staff. It's a technical/legal detail rather than anything that affects the larger points here.)

Overall, the project seems blandly generic and customary, something in the meh-middle space between bad and good. If you see something really great or awful about it, chime in! But in the absence of that, there are some other incidental things to note. Let's wander a bit.
Interestingly, the City's online zoning map doesn't actually correspond exactly to the description of the case.

In the City's map, the lots are all zoned "CR," but the application says the part abutting the park is zoned "CN." And you will also notice that the park is shown here as zoned "RS" not "PA" for public amusement.

A map from an earlier land use decision in 1997 shows the approximate location of the CN strip in question, on the east side and shaded.

This early concept was for a giant parking lot with a large market and strip mall. An apartment complex is not obviously inferior! And of course if done well would be a meaningful improvement on a parking lot.

On other side of the shaded lot is Wendy Kroger Park, and the City's proposed conditions to the development include an easement and pathway connecting the cul-de-sac bulb with the Park's western side. That would be an important piece of east-west connectivity here.

The Park was originally called "Cannery Park," and was named for Kroger only in 2004. The City had purchased it in 1980 from the Stayton Cannery, also known as, or perhaps a successor to, United Growers Cannery. According to Jory family history, Roland Jory "founded the Liberty plant as the original Jory Packing Co.," probably in the 1920s or 30s. A local tomato cultivar apparently processed at the plant was called the "Jory tomato," which has been revived and is for sale as an heirloom seed.

(Chapt. 3 of the Pringle, Glenn-Gibson, Claggett, and Mill Creeks Watershed Assessment has more on Pringle Creek and a few additional bits on the cannery. Not perhaps coincidentally, Wendy Kroger wrote this chapter! ) 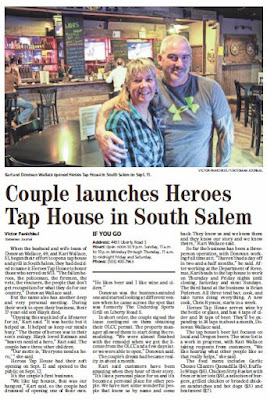 On the west, on the other side of Liberty Road, Roth's and the Sunnyslope shopping center is right there and, as the crow flies anyway, it is a short distance to groceries and some key retail from the proposed apartments.  At Cunningham the current neighborhood pub format du jour, the "tap house," has found a new instance. The Allan Bros coffee shop closed a while back, but maybe something new has replaced it. Though it is too much parking lot and auto-oriented, with the buildings mostly set behind large parking lots, there's a bit of a neighborhood-scaled commercial center here - which is intended as you can see from the zoning map.

Walkscore gives the apartment site a middle rating of "somewhat walkable," and a higher rating of "very bikeable." Of course, Liberty and Skyline are busy roads, and the mere existence of bike lanes and flattish terrain here is no guarantee of comfort. This is a place where the algorithm misses human judgment: The subjective experience of biking on Liberty is stressful for many, and people new to biking would not probably find it "very bikeable." Moreover, upstream on Liberty there is the problem of the gap between Browning and Commercial. Nevertheless, for at least some errands it would be not far at all to walk or bike, even if the sidewalks and bike lanes were not optimally comfortable. There are

The neighborhood objections are of the usual sort and mainly seem to be:
But a site near a major grocery store and served by transit on a major road is a good place to put apartments. The Staff Report also notes that the Housing Needs Assessment suggests Salem will have a deficit of multi-family housing and will want to shift some industrial land to commercial and multi-family residential. This project does exactly that. So at least in the big-picture, it looks like density in the right place.

A development at this location could move towards something more walkable and mixed-use, but that's an opportunity that doesn't look like it will be seized - and maybe it's not the best spot for that anyway. There will be a site plan review later in the process, so perhaps the project will show more then.

In the meantime, as we think about redeveloping other industrial sites around town, the way this cannery became a Walgreen's, storage units, and a what looks to be a generic apartment complex is an opportunity missed to create a more vibrant mixed-use kind of cluster for a more walkable neighborhood.
Posted by Salem Breakfast on Bikes at 7:00 AM

By email City Staff comment with a correction and clarification:

"In 1997 when the property was re-zoned it wasn't actually zoned to CN (Neighborhood Commercial); instead for a portion of the property they limited the uses to only those allowed in the CN and CR zone. So even though it was zoned CR, if the use isn't allowed in both zones you can't do it. I assume it was an attempt to limit the impacts of the CR zone.