This is really good.

David Bragdon was President of METRO, the Portland-area Metropolitan Planning Organization. He left to work for Mayor Bloomberg on sustainability issues in New York, and now heads up Transit Center, a non-profit focusing on transit and urban mobility. He's in Portland right now, and he's published a version of a talk he gave, "Reform before revenue: how poor governance and management is holding Oregon back." 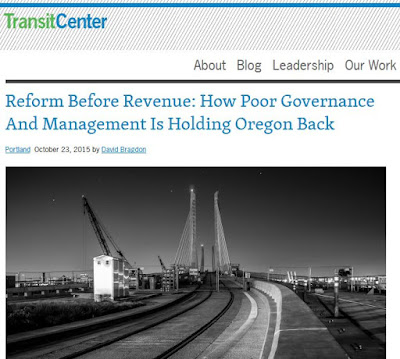 Bragdon was an outspoken critic of the insanity behind the Columbia River Crossing, wrote a column about taxi-driving very early in his career for Willamette Week, and is really smart and witty.

In 2009 he wrote to a British reporter at the Portland Mercury:


[Y]ou are probably the only practicing journalist in this town who knows the difference between a fen and a bog.

That is why of a Sunday morning I am willing to give you this scoop. You have earned it.

We bought a fen.

There you have it. The scoop. We bought a fen. It’s 13 acres. The rest of the media will learn this fact only on Monday or Tuesday, and they won’t know what to do with it. Being so fixated on stadia, they may think we bought Fenway Park, which as you would probably not know is a baseball stadium in Boston where the Red Sox play. The Red Sox are a baseball team, not to be confused with Rex, who is a Metro Councilor. So Boston has Fenway Park, we have Peach Cove Fen. Here is a picture suitable for framing....

About the CRC, in 2010 he said as part of public testimony:


After my nearly three years of involvement – again, three years which started with me as a vote in favor of the conditional LPA – my reluctant conclusion is that the current CRC proposal by the state highway divisions dramatically fails both of those basic tests: it has not been proven to be a cost‐effective solution to the many challenges in this corridor, and it has not been planned and developed in an innovative or inclusive manner. As a result of the state highway divisions resisting any scrutiny or suggestions which did not fit their pre‐determined approach, confidence in the project, including my own, has been eroding at a time when a successful project would need to be gaining credibility....We need Plan B, not more unending promotion and defense of a Plan A which has failed to pan out.

Back to 2015, here are some of his remarks. The whole thing is long, but totally worth reading. Even though this is a policy piece, you can still hear echoes of his humor.


Portland and Oregon are being left behind. Debate in Portland rages not about whether streets will be improved like in Seattle or Denver, but about whether or not a fee will be adopted simply to maintain streets to basic good condition, after years of neglect and critical audits. In the same month that the legislature in Olympia invested significantly in transportation, 175 miles to the south in Salem the Oregon legislature chose not to. Legislators’ reluctance was partly attributable to the revelation that management of the state Transportation Department was making claims about emissions that were proven to be wildly exaggerated.

The common theme to these Oregon stories? Credibility – or lack of it.

Other regions are significantly reforming their transportation governance. As a result they are able to spend more money wisely. By contrast, Oregon has stuck with a governance model of the past that is unaccountable and has lost the confidence of the legislature and public. Glowing danger signals like chronically flawed data forecasts, under-maintenance of core assets, and increasing debt despite past tax increases should alarm anyone concerned with Oregon’s competitiveness. Reform will happen only when bold leaders outside the existing transportation hierarchy recognize that the current non-system is underachieving, and that reform is the only way to increase and maximize the public’s investment. Other regions are making those changes and investing now. Portland and Oregon should too. 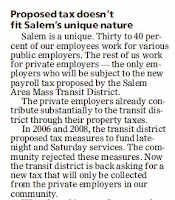 The piece is full of comparative examples, and is strong evidence that asserting Salem or Oregon is "unique" is a totally counter-productive move that shuts off the possibility of learning from other communities, of whatever size and organizational level.

If you are at all interested in the structural and institutional reasons we are having so much trouble with big things like the Third Bridge and small things like better bike lanes downtown, the piece provides some important context and analysis.

OPB is scheduled at 7pm tonight to broadcast Bragdon's talk at the Portland City Club.

Not sure this merits a post of its own, but it is interesting. Also interesting is that the other statewide media don't seem to have picked up the story. (It's in the East Oregonian.) It's hard to say how substantive the investigation may be. It could just be a reassuring pose for legislators. Could be more.
Posted by Salem Breakfast on Bikes at 1:00 PM

Thanks for the links! It's really striking how critical Bragdon is of ODOT and such.

Updated with link to East Oregonian story about a management assessment.