Well this is interesting. Over at CANDO, they've got a note about an open house for a renovation of "the campus" at SAIF, and if SAIF thinks this through, there's an opportunity to activate what is currently a very inert, ornamental emptiness rooted in the 70s Pringle Creek urban renewal project and the associated semi-brutalist architecture.

Out in back is a magnificent oak and stonehengian post-and-lintel metal sculpture, but it's separated by a berm for flood-control from the creek-side path, and it's a void outside of business hours. 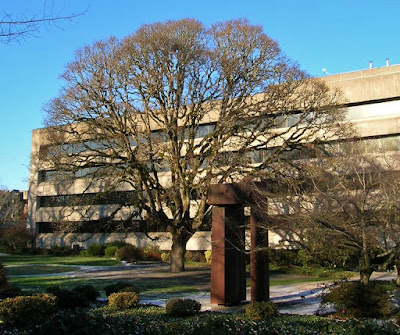 The front is equally empty, too much parking lot and path, all of it fronted by the zoomery of OR-22.

This block, bounded by High, OR-22/Trade, Church, and the invisible alignment of Mill is greenspace and parking lot, seemingly like a park, but deadly dull and empty after 5pm and on weekends.

The project will be interesting to watch - though it could very well just be a set of landscape cosmetics, lifts, and tucks.

(See here for more on ornamental emptiness and the old urban renewal area. And as a late PS - the project could also include multi-modal improvements on Church Street as a family-friendly bikeway and greenway.)

Earlier this year 14 Black Walnuts were cut down at the State Hospital because of Thousand Canker disease. And now there's more.

In a "minor historic review," the City has approved an application to remove another six, including the one pictured above.

They really are ill and dying, so it's not like this is some made up excuse to go cutting down pretty trees. So take a moment wander the grounds this fall and enjoy the walnuts that remain. They won't be around much longer.

The City is specifying that they be replaced with native White Oaks. It'll take a few decades for them to duplicate the crown height and diameter, but at least they are native and more resistant to disease.

The presentation boards from the middle Commercial study are out, and they City is also collecting responses to a survey based on them.

Take the survey and let the City know you're behind the proposals!

(There doesn't seem to be anything new to say, so you can read previous thoughts here. The plans are good, not great, improvements and not tranformative, but deserve strong support regardless.) 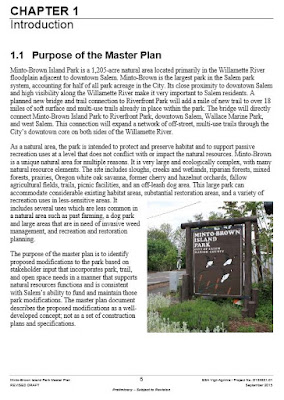 Last month the City released the draft Master Plan for Minto-Brown Island Park. The Parks and Recreation Advisory Board will be reviewing it on Thursday the 8th with a view towards making a recommendation for the formal Public Hearing at City Council on  Monday the 12th.

With the Minto Bridge and path in construction now, there doesn't seem to be very much  to say about the draft plan here - though there is plenty of interest in it from other perspectives. Since we have a tree thing going, it is a little sad to note that the plan calls for the removal of the cherry orchard and replacement of it with more native plants and trees. Interestingly the filbert orchard will be retained.

Additional materials are at the project site.

Update on the Walnuts...

Here's a note on the new location for the post-and-lintel sculpture on the Willamette University campus.