Local MPO to Look at Area Commission Rankings for Biking, Walking, and Transit

The Technical Advisory Committee for our local Metropolitan Planning Organization meets tomorrow the 13th, and they'll be looking at the latest rankings for Federal and State "non-highway Enhance" funds for the 2018-2021 cycle. 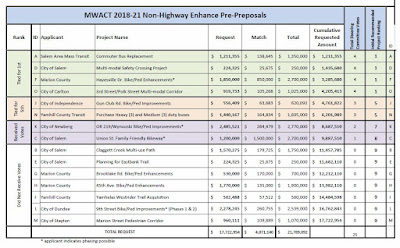 On the first, you may recall, our area commission on transportation, MWACT, met and ranked the 15 area projects competing for these "non-highway Enhance" funds.

In that ranking there were four tiers. In the first:
In the second:
In the third:
And the rest  of them in a fourth tier that attracted no votes (click on the image at top for more detail).

The only significant change from SKATS to MWACT is the fall of the Union Street Bikeway from the second tier to the third tier. That's disappointing to see, and it may be an artifact of politics and geographically distributed representation rather than weighting by population. As much time, energy, and funding that has been put into the Union Street Railroad Bridge itself, it remains disappointing how slowly gaps to it are being filled and how long it is taking to create a complete corridor along Second Street NW and Union Street NE. At the current rate it looks to be about project of a quarter-century. One whole generation.

Bus replacement seemed to be popular, it's also interesting to note.

One thing to bear in mind in thinking about this program is that proponents of the Third Bridge want to suck up six or seven years of "Enhance" funding.

Enhance is the program (or its equivalent in subsequent Federal transportation packages) funding these biking and walking projects. The funding memo envisions taking all of the funds for both highway and non-highway projects in the area (the memo calls out the MWACT proportion of Region 2 as 17/27, as I read it here) and allocating them to one mega-project, the giant bridge and highway.

But under this approach a cost of a mega-project like the Third Bridge is that it will eliminate funding for things like sidewalks and bike lanes, family-friendly bike boulevards, and replacement buses.

To proponents it may seem "reasonable to anticipate this funding amount," but it would come at the expense of many other good things - things some of us think are vastly more important.

An opportunity cost of funding the Third Bridge is that we won't do a lot of other worthwhile and "reasonable" things.

One very interesting tidbit in the minutes from the September meeting was news about the Corvallis area's greenhouse gas modeling activity.

Greenhouse gas modeling and scenario planning has been a contested matter here, and our MPO has resisted both voluntary and compulsory modeling. The Corvallis MPO undertook their first round of modeling, and the results are impressive - altogether, however, in the wrong direction:

That points to a very low ceiling for the reduction in emissions Salem's adopted plans and policies are likely to produce, and suggests that larger system changes will be necessary to make a serious dent in emissions.

If our current levels of "non-Highway Enhance" funding won't get us to meaningful levels of greenhouse gas reduction, image what would happen if they just simply disappear for a giant bridge and highway!

Right now, though, the MPO is unwilling to begin the lower level of "strategic assessment" to say nothing of the more robust "scenario planning."

The TAC will also ponder what to do with the sofa change, the windfall of $1 million in Federal funds for the 2015 cycle. The leading unfunded contenders include a bunch of hydraulic autoism - though there is one project for sidewalks and bike lanes near Brush College Elementary School. The funds be added to a current and underfunded project, to use as a local match in a future Enhance or ConnectOregon application, or even start a whole new round of competitive applications.

N3B has some on the possibility of using these funds on planning a seismic upgrade to the Center Street Bridge, but in the memo it is buried as option 5(a) - and option 5(b) is also to fund one of the unsuccessful TGM applications, which included the "bridgehead district" plan for the Third Bridge. I don't read the memo as endorsing a seismic upgrade study very strongly at all, however. But N3B is right, that it least it might be discussed.

The Technical Advisory Committee meets Tueday the 13th at 1:30pm. It meets at MWVCOG/SKATS at 100 High St. SE, Suite 200, above Bar Andaluz and Table Five 08.
Posted by Salem Breakfast on Bikes at 12:01 PM

Very briefly - and maybe we'll come back to this in a future post - here's a slide deck and the full report from the Corvallis MPO.

Page 5 From the report has conclusion about a 2.1% reduction from implementing adopted plans alone.