Our local Metropolitan Planning Organization, the Salem-Keizer Area Transportation Study, meets tomorrow, Tuesday the 27th, and the items of interest are mainly information rather than votes or actions.

At the head of the list is the on-going slog of greenhouse gas modeling. (Full agenda and packet here.)

Back in 2011, the Land Conservation and Development Commission adopted targets for 2035 on greenhouse gases for our largest cities. Now that a few rounds of modeling have been done, a couple more cities added to the list of those involved, and a few years have passed, there's an opportunity for a second iteration of rules and modeling refinements for 2040.

So SKATS will get an update and appoint a representative to the Advisory Committee overseeing the process. 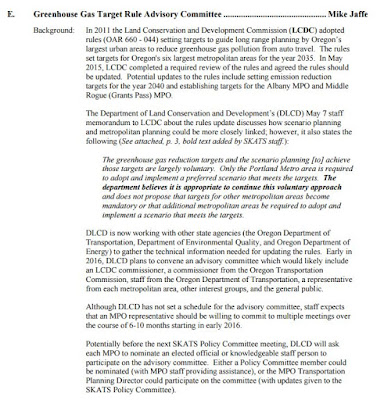 One thing that has come out since that expression of skepticism in May, in which Chair Clark said she thought "current local plans would accomplish the targets if there was money to fund the projects included, [but] unfunded, in those plans." As we have seen from the Corvallis Strategic Assessment (shorter slide deck here), under the model in use right now, the current local plans only achieve a 2.1% reduction, nowhere near the 21% called for. Salem's target is 17% I think (I mean, we should just say 20% across the board, since it seems impossible the error bars in the modeling exercise allow for 1% precision). Chair Clark's assertion is therefore almost certainly false, and hopefully staff will begin to push back against this fantastical line of thinking.

But it seems that the main reason to keep things voluntary is that a top-down, compulsory process threatens at this moment to end in revolt more than in commitment and success.

So, maybe keeping things voluntary is the best. I don't think it's possible to be certain here. It is disappointing to see the painfully slow slog, though. Time is running out.

Yet there is some good news.

In the LCDC report on the new rule-making:

Maybe by delay, once Salem finally begins to undertake this exercise, it will be possible to better integrate it into the Comprehensive Plan, as well as elements like Housing Needs Assessment and Economic Opportunities Analysis. With better integration, the largely theoretical policy recommendations might more easily be translated into binding rules and regulation - things that effect actual change.

In light of our fractious debate over Cherriots, a letter from the Corvallis area MPO is interesting:

From the September Minutes

Regarding last month's rankings for Enhance, City Staff "announced that the city of Salem’s preference would be for the Union Street project then the safety crossing project." It will be interesting to learn more about why the Union project fell in evaluations.

Regarding the TTI Study, it was good to see some criticism and qualification:


He noted that it was informative to see how the Salem area compares to similar size urban areas or larger areas like Portland. He did note that some transportation professionals are critical of the methodology used by TTI, which each year creates some controversy due to coverage of the report by the national and local media. Given the critiques, Mr. Jaffe said that the material from the report should be used cautiously. In response to a question, Mr. Jaffe responded that in his opinion, the conclusions reached in the report related to the level of congestion could be overestimated for reasons pointed out by critics of the methodology.

The real leaders on the SKATS Policy Committee mostly all conservative Republicans who have no use for GHG modeling. They may not all be "deniers" (though some might be), but they are certainly "ignorers" as we have seen by their inaction. Until we elect more progressive Democrats to local city and county offices who sincerely care about climate change, and want to do something about it, we are just going to get more of the same inaction. The reason we are seeing action on curbing GHGs in Portland, Eugene and Corvallis is because they have progressive leadership. Salem-Keizer doesn't, and the results are predictable. Next year we need to elect more leaders like Tom Andersen, who is the only elected official in Salem speaking out to support the payroll tax for Cherriots.

Democrats aren't always meaningfully better. For example, it may be easier for a conservative urbanist to embrace the virtues of market-based solutions like congestion pricing and priced parking.

From the D's we have silly things like a low carbon fuel standard instead of just raising the gas tax and instituting a carbon tax. Even in Portland D's struggle with parking supply, parking pricing, and increased density in or near established neighborhoods - all of which will be important tools in shifting to a lower-carbon city.

And they were among the biggest champions for the insanity of the Columbia River Crossing.

If better leadership from above is important, it is also true that populist interest in things like free parking, cheap gas, congestion-relief through mega-projects, and single-family housing insulated from commercial or multi-family encroachment retard our efforts from below.

Priced parking, lower parking minimums, and an embrace of density could, for example, open up interesting conversations with developers that likely cut across party lines. It would also contribute to more affordable housing.

So on this particular set of topics, I'm not sure how useful is the binary of party affiliation.

(Anyway, please let's keep conversation here to the issues and not about politicians and party politics.)

The politicians are the problem. I went to the last SKATS TAC meeting where the staff was talking about whether it would be possible to get the "electeds" on the Policy Committee to voluntarily do "scenario planning" to reduce GHG emissions in our region — something being done in Portland, Eugene, Corvallis, and even (drum roll) by the conservative Rogue Valley MPO! The conclusion after an hour of jaw-boning was that it would be a total waste of time to take a proposal like that to our Policy Committee.

Hey, it's your blog so you can set the rules, but to put the shortcomings of our elected leaders here out of bounds for criticism is to ignore the heart of the problem.

I agree with Jim. The people are the problem! That is why we don't get action on the policies. Debating policies and ignoring the people is mostly a meaningless academic exercise.