Tip of the Cap to Dave Moss and George Bell

There's not a lot of transportation news right now, but the holidays have brought news of the deaths of two thoughtful people who in their own ways have tried to make Salem better, and it seems worth a pause to note. 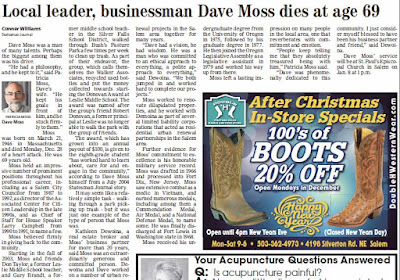 In addition to whatever personal memories you might have of Dave Moss, you may recall the curious episode of the cemetery path flip-flop. 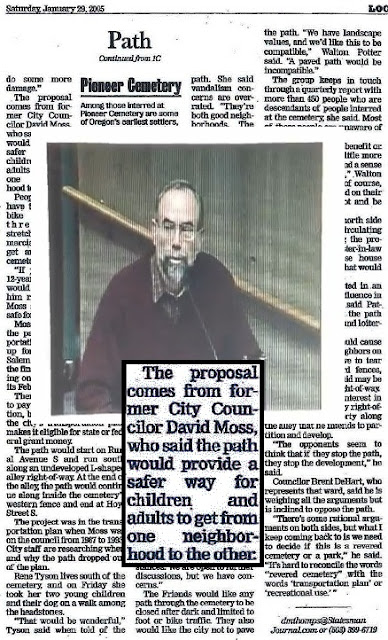 Back in 2005 Moss proposed a path connection through the Pioneer Cemetery, which is also a City park, but by 2011 the concept seemed like a liability and roused furious opposition from Friends of Pioneer Cemetery. Just when it seemed possible retain a possible connecting piece and to keep the concept in the Transportation System Plan, Moss himself decided it was no longer useful, that it complicated things for one of his own developments, and opposed it also. (You can read the whole saga here. A weak compromise was forged on paper, but the effective outcome was to keep a path connection theoretical.)

Though this is a disappointing footnote, however interesting it is from our transportation interests, it is not the important part here.

The more important thing to celebrate is not only his life as he lived it with whom he loved and who loved him, but also to celebrate smaller scale developers who work the difficult seam between neighbors who often don't want change, and the real possibilities in small scale redevelopment and urban vibrancy. That whole "missing middle" thing. Salem needs more of this and people like him. Hopefully more will also come out about his projects around town. His wife Pat was a long time teacher of Spanish, and they had pretty deep roots into the community here.

Over at Polwatch also is the sad news of George Bell's passing. He was a journalist and assistant Secretary of State - and a bunch of other stuff, too - and commented thoughtfully on national and state politics via his blog. I wish he had written more about local politics, but this was not his interest.

His wife Frankie, an institution at the Capitol herself, you may recall from a profile written by Kelly Brown a few years back.

His son has a nice eulogy on the blog and Bell himself wrote a short summation earlier this fall.

Even if you don't know them and do not grieve personally, both Bell and Moss represent a type of civic-minded personality and almost certainly deserve more recognition than they get.

Condolences to family and friends.
Posted by Salem Breakfast on Bikes at 12:01 PM

I should have included links to favorite Polwatch notes. They are two-part pieces on two important governors.

As he noted in one of them, "I’ve been on a first-name basis with most of the governors during that time [a fifty year span!]: Holmes, Hatfield, McCall, Straub, Atiyeh, Goldschmidt, Roberts, Kitzhaber, Kulongoski, and Kitzhaber again."

Dang. That's a lot of history there.

Thank you for noting the passing of George Bell, who was a mentor and good friend of mine for many years. He had a front row seat in the McCall administration — a great time for Oregon. His last job for the state was as a deputy director at ODOT. In retirement he served on several State commissions including the State Library Board, Oregon Parks and Recreation Board and the State Scholarship Commission. He was also a poet and a brilliant writer. He ran for the Legislature twice in his swing district (he was a D) but was defeated both times, unfortunately. A selection of his best blog posts would make a wonderful book, at least for his many friends and acquaintances. His blog was a wonderful outlet for him in old age. He was the kind of person who just had to put a pen to paper and express himself, at least every few days. He'll be greatly missed.