You've seen the sideways soda cans painted matte black. We may not get the giant oil trains, but oil comes through Salem.

And crucially, ODOT and the railroad companies try to keep as many details secret as possible. So who knows what really is being shipped.


A train towing cars full of oil derailed Friday in Oregon's scenic Columbia River Gorge, sparking a fire that sent a plume of black smoke high into the sky.

The accident happened around noon near the town of Mosier, about 70 miles east of Portland. It involved eight cars filled with oil, and one was burning, said Ken Armstrong, state Forestry Department spokesman. [Sure looks like more than one on fire.]

I suppose it's alarmist to say "It could happen here." But it could. The UP railroad passes right by two schools, in fact. (And there are other hazardous things on those railcars, too, it should be said.)

More (and no pooping!) today from the Oregonian:


The cars derailed within about 20 feet from the city's sewage plant, said Arlene Burns, mayor of the city of 440 people, east of Hood River. Residents have been asked not to use bathrooms and other drains into the city's sewage lines.

"We've been saying for a long time that it's not fair for trains with toxic loads to come into our towns near our Gorge," Burns said. "We don't have the capacity to fight these fires"....

"We need the ability to fight an oil fire which water does not fight nor does sewage," Burns said. 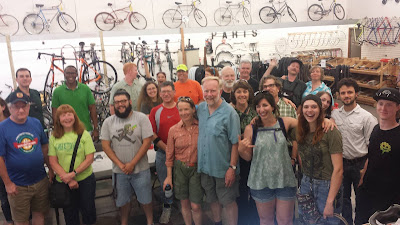 Looks like about 25 to 30 people showed up for the Bike More Challenge afterparty at the HUB! That is great to see.

But if you bike much around town, though, you'll recognize many familiar bikey faces, and so the uncomfortable question remains: As an "Encouragement" activity intended to attract, boost, and support new bike riders, the Challenge still effective?

It will be interesting to learn more about how it fared in Portland this year. There it enjoys much greater institutional support, and with the change in season and change in theme to embrace more trips than just the work commute, did it attract meaningful numbers of new riders? Or does it mainly serve, as it seems to do here, people who are already riding frequently. (See mid-month notes here.)

That's not an argument against Encouragement actions - every little bit counts! - but it is to say that a whole lot more is necessary before they can really take off and participate in structural change to the way we handle the total transportation mix.

Until people feel actually comfortable on our roads and streets, we will have a hard ceiling on the number of riders it is actually possible to encourage. 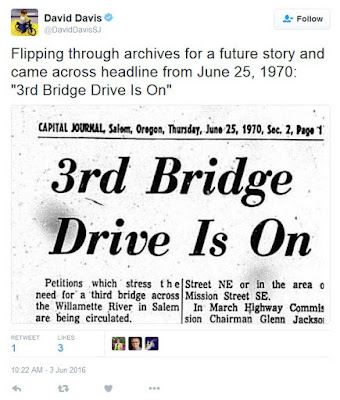 A reporter at the paper yesterday found a headline from 1970 on the Third Bridge.

Maybe they'll write more about it, but just from the headline it seems like two totally divergent readings are possible:
Here of course we think the second is the best interpretation, a history of overestimating, even manufacturing, a "want" and trying wrap it up and sell it as a "need."

(For more on the antecedents in I-305 planning, see here.)
Posted by Salem Breakfast on Bikes at 10:00 AM

"Encouragement actions won't scale up with meaningful numbers until we get greater changes in land use and engineering (and construction)."

.... or Salem is able to attract more of the types of people that choose to bike.

I personally think that Salem in many ways is more bikeable than Portland. I think that Portland, Eugene and Corvallis have higher rates of biking because those places provide a lifestyle that appeals to those that bike. Yes land use and engineering explain some of the difference but probably not as much as you think.

The lack of a large university - which seems to be the single-most important demographic/psychographic element in what you rightly point out about lifestyle - is almost certainly not something Salem can remedy. So it has always seemed like that was something to put to the side and bracket. You are right in general terms, but it doesn't seem possible to do anything about this variable in the equation. As remote as the needed changes in land use and engineering seem, attracting the lifestyle that orbits around a large university seems even more remote.

(Do you know of a community with the requisite lifestyle ethos that also does not have a large university in it? If so, they would be an important model!)

Since moving here in January 2007 and being astounded/appalled to learn that there was a plan to squander hundreds of millions on a giant piece of sprawl-enablement, I have often wondered how/why we don't purposefully bring more and more of Chemeketa to the downtown area, making it more accessible by bike and bus and walking to the people most likely to need bike, bus and foot access to it. Chemeketa is not a Big 10 University like in Madison/Ann Arbor/E Lansing/Minneapolis, but it's still a huge slice of people who could really benefit from a better location for the school. PSU is a huge part of why Portland is bike able and active and energized past 5 p.m. -- Chemeketa could be a big contributor to that in Salem.

"The lack of a large university - which seems to be the single-most important demographic/psychographic element in what you rightly point out about lifestyle - is almost certainly not something Salem can remedy. So it has always seemed like that was something to put to the side and bracket."

OK. But why? If it is an important factor and we can't easily change it then why are you so hard on Salem? It could be that if you compare Salem to its non-university town peers--Salem is actually performing much better than you claim. Here is the latest list of Bike Friendly Communities:

The list is dominated by university towns. The ones that are not university towns are upper-class, white playgrounds for outdoor recreation--another thing that Salem can't easily change.

Not sure what your point is. The position here has always been that by national standards Salem is pretty good - a legitimate "bronze" - but that by absolute standards it has very far to go. If your point is that "Salem is just fine the way it is," well we disagree, and it will not be possible in friendly debate to win the point either way.

The headline was found during research for another article, specifically an outdoors feature due out this weekend. A bridge follow is overdue (as close to a personal opinion as I can give) and I think one is on the calendar some time this summer by another reporter.