On Monday Council meets and the lead item, on which there will be no opportunity for public comment, is the adoption of the amendments package for the Salem River Crossing.

Especially because there is no further opportunity for public comment, I'm not sure how useful it is to respond to the latest batch of documents - all 359 or so pages of them. 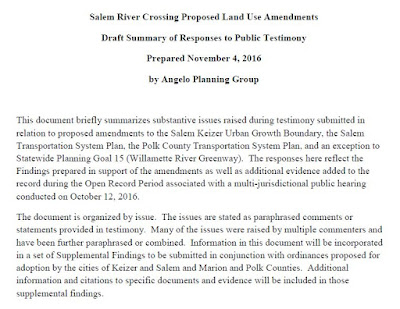 On one quick pass over it, a couple of things stood out. These mainly centered on why the haste and short time-line matters. (Maybe on subsequent passes other things will seem more important, but this was the first impression from scanning it.)

A couple of areas of critique are dismissed as not relevant. One of them was a discussion of the "threshold analysis" (it was also discussed here).

It's a neat trick when you can withhold documents until the last minute and then complain that the citizenry responded to the wrong ones!

In the matter of interpreting some paragraphs of OAR 660, it may be that critiques misread them out of ignorance (though this could also be a legitimate and reasonable difference in interpretation). If the misreading is significant, and if the proper meaning is actually clear with greater care and time for reading, then that is evidence also of a requirement for too much haste in citizen response.

But with too-short deadlines to respond to tricky matters, it would not be surprising for citizens and non-experts to make some errors. This is not evidence for stupid citizens, but instead is evidence that there wasn't time for citizens to absorb and respond adequately. Evidence, perhaps, that the way the matter was structured was designed partially to elicit random, poorly constructed, or otherwise incorrect or insufficiently detailed responses. You know, set up for failure. 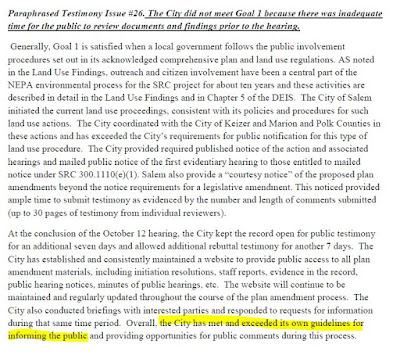 Moving then to a summary kind of discussion of Goal 1 compliance for "citizen involvement," I don't find this defense very persuasive. It rests on procedural compliance, and attends mostly to the whole of the process rather than this particular part.

It's great that the City has maintained the website for public access, but you know, that doesn't address whether the City shared the analysis on the UGB Hearing far enough in advance to give citizens reasonable time to consider and respond in detail to thousands of pages of documents, many of which involved obscure legal niceties. The City's maintenance of the website is relevant to the whole of the process, and without more specific discussion of the dates documents were published, does not at all address criticism that Goal 1 criteria should also apply proportionally to parts of a process. The "discovery" phase of the Hearing has also turned up more-or-less secret documents that were never shared originally to any public website, either the City's or the one operated by ODOT. So there have been limits to the City and ODOT's commitment to sharing.

Specifically, the discussion here in that first paragraph is about lead times for content-free formal notices of the public hearing, not about lead time on the publication of relevant documents and analyses:


The City coordinated with the City of Keizer and Marion and Polk Counties in these actions and has exceeded the City’s requirements for public notification for this type of land use procedure. The City provided required published notice of the action and associated hearings and mailed public notice of the first evidentiary hearing to those entitled to mailed notice under SRC 300.1110(e)(1). Salem also provide a “courtesy notice” of the proposed plan amendments beyond the notice requirements for a legislative amendment. This noticed provided ample time to submit testimony as evidenced by the number and length of comments submitted (up to 30 pages of testimony from individual reviewers).

In that final sentence, we flip from quality to quantity. "Geez, look at how much you wrote, you must have had plenty of time! We probably could have made the time lines even shorter."

Certainly the sense here was that it was necessary to generate a large amount of material in order to see if any of it stuck. It did not seem possible to consider the entirety of the UGB matters in a patient and thoughtful way, and to sift unproductive critical approaches from more useful and trenchant ones. The blizzard seemed designed to obscure the heart of the matter.

As for the number of comments, distinct from length, that is not very relevant, as many of them are one paragraph statements of "yay bridge" or "nay bridge," and in no way engage the substantive matters of the UGB expansion on the merits. They are expressions of public sentiment, not analyses of the matter at the hearing, and have little bearing on the public's ability to "to be involved in all phases of the planning process" or proof "that technical information is available in an understandable form."

I think that it is true that no independent supporter of the bridge actually engaged in any analysis of the UGB expansion on the merits. They rang variations on "yay bridge" only. It seems likely that these supporters did not find the information "available in an understandable form" and so limited themselves to political expressions of support rather than substantive arguments. Even the Chamber, who might have had the greatest resources for an independent form of analysis, seemed to reply in schoolboy prose and the generalities of one who hadn't actually done the homework and reading:


In studying the 432 page staff report, we believe that the proposed amendments comply with state laws and rules related to growth and UGB adjustments.

But then provide no specifics on ways that the amendments do comply, just the usual bromides about "future economic vitality," etc., etc. You would think the Chamber would have a more detailed and independent analysis that really drilled into the ways this thing was going to help us. If it was so great, the Chamber would have overwhelming evidence!

A few years back, Public Comment on the DEIS was much broader and more numerous, and shows the ways that part of the processes more clearly met Goal 1 objectives than this part of the process. (I think they made the wrong decision - but that was not because the public didn't have sufficient opportunity for comment, but was because they simply ignored public comment to effect the pre-determined outcome. That's a different matter!)

If settled case law says that merely mailing notices well in advance of meetings, by established schedules and procedures, satisfies the Goal 1 requirements, then I guess we don't have much of a leg to stand on. But it is interesting that the response never directly engages the questions: Were documents posted with sufficient lead time and was "technical information" in an "understandable form"?

Over the weekend maybe we'll take another pass at this summary document or the others. There are other contested questions that might be interesting. (One of them is the way that Cherriots' dissent is being handled.) But there might not be much point, too, to more time on this, since the hearing is closed to further comment.
Posted by Salem Breakfast on Bikes at 12:01 PM