17th Street has been an interest here for a while. It originally was not continuous, and stopped at both Mill Creek and Shelton Ditch.

Over the course of the 20th century, it grew from a small neighborhood, local street to be a minor arterial currently serving between 11,000 and 12,000 car trips per day.

There's a whole lot we got wrong about 17th Street.

Even with fewer car trips than expected, one consequence of the widening is we have had to backfill with enhanced crosswalks and medians at several locations. 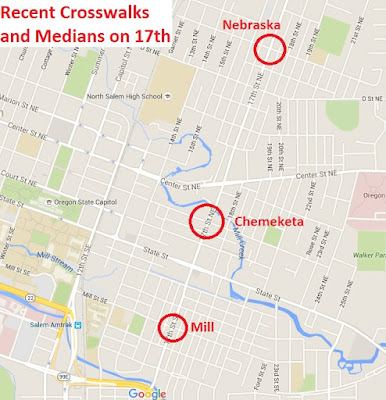 Here is a note about the original widening to four lanes in the 1960s. That's when the front yards got all whacked down.

This 17th Street appendix to the Mission Street project appears to have both bridged Shelton Ditch and created the connection to Mission Street. The final design reduced the cross-section from four standard auto lanes to two standard auto lanes, a center turn pocket, and bike lanes: A typical "road diet" configuration. It seems, in fact, to be Salem's first instance of a road diet. 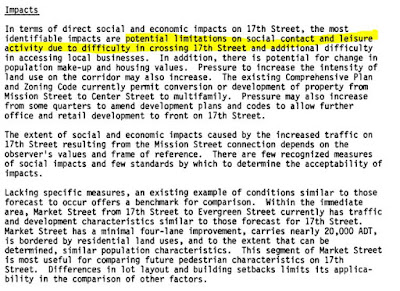 Maybe the most interesting thing is the observation in the FEIS about "limitations on social contact and leisure activity due to difficulty in crossing 17th street" arising from an increase in traffic after a connection to Mission Street. 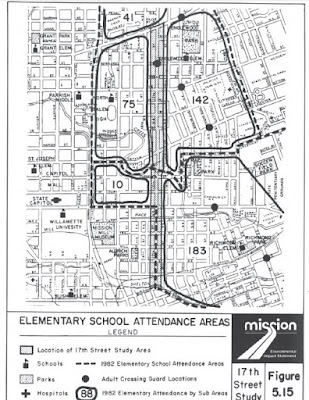 Already in the early 1980s, we knew this would be a problem! We even showed how it would impact kids going to school. It is not surprising then that in the 2010s we would be going back with the enhanced crosswalks and median refuges.

There was also skepticism that bike lanes could be provided. Bike counts on the four lane configuration were small. Of course the two lanes + turn lane configuration did allow for bike lanes on 17th, and more people use 17th for bicycling today, though it's still far from a "family-friendly" standard.

The auto traffic counts are fascinating. 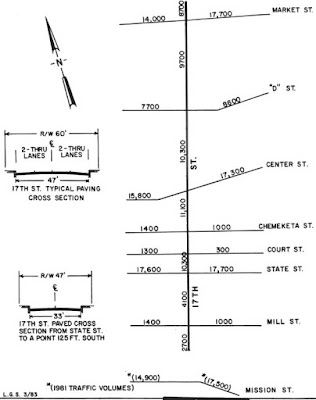 Here are the projected year 2000 counts and the latest counts from the City traffic count site (most of these are 2010s, but there's were a couple from the mid-2000s).

Almost all of them are significantly lower than the 20 year projected volumes for year 2000! Only one is meaningfully higher, the east side of Mission Street beyond 17th. Many of the other are not just less, but wildly less. North of Mill Street, 17th was projected for 21,000, but the most recent count is for only 11,070. Consistently, current counts on 17th are almost half of projected year 2000 volumes. Even busy arterials like State and Center Streets have less traffic than was projected.

That is evidence that for projects like the State Street study, which is currently fretting over capacity limits projected in 2035 conditions, planners significantly overstate future traffic volumes under current modeling assumptions. (And of course this is also probably true for the Salem River Crossing and most all of our other current projects.)

Once we hit that 20 year mark, or whatever horizon is in the original planning, all of our projects should have a detailed assessment of modeling and assumptions. This is a great shortcoming in traffic planning and engineering, that there is no feedback loop or self-assessment scheme. Once a project is done, planners and engineers show little interest in asking "how'd we do?"
Posted by Salem Breakfast on Bikes at 11:30 AM