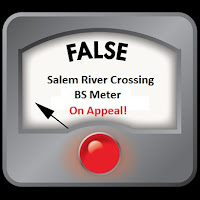 The weekend is almost here (and the blog will go silent for a few days), but this "Friday news dump" is especially cheery and welcome!


Salem, Oregon – On December 30th, a group of Salem area residents filed an appeal of the City of Salem's urban growth boundary (UGB) expansion to construct a third Willamette River bridge to the state Land Use Board of Appeals (LUBA)....

The eight co-petitioners are asking LUBA to reverse or remand the Council's decision.

"We're appealing the City's decision to expand the UGB for a third bridge because its a bad idea for Salem and because it violates local plans and state planning rules," said Robert Cortright, the group's spokesperson. "It's a bad idea because it's an expensive, unaffordable project that won't reduce traffic congestion and will destroy homes and businesses"....

The LUBA appeal will contend that the City's actions violate state planning laws because they failed to consider all alternatives to address peak hour traffic congestion problems. To justify a UGB expansion, local and state planning rules require that the City show a new bridge is the only reasonable way to meet future transportation needs. But the City's own plans and studies show that widening the existing bridges in combination with other actions, like expanding transit service and staggering work hours for state employees, would work as well in reducing congestion — and at a cost that would be hundreds of millions of dollars less than a third bridge.

Maybe next week there will be more to say!
Posted by Salem Breakfast on Bikes at 1:00 PM