On Thursday the 15th the Historic Landmarks Commission will be looking at another downtown storefront facade restoration. (Update: Rescheduled for January 19th.)

This time it's for the building that has housed Engelberg Antiks.

Documentation is scarce, but the Downtown Historic District materials claim the building was constructed circa 1915 and underwent extensive modification in the 60s. Formally it is classified a "historic, non-contributing" building.

The application for the project straight-up says it wants to emulate the appearance of the Fred Meyer storefront from the 1930s, and the Staff Report recommends approval.

Though it's nitpicky, and ultimately not very important at all, we can probably rule out construction in 1915. The summary of construction activity in Salem for 1915 doesn't mention it.

It might be nice to figure out when it was built and for whom.

Fred Meyer stores didn't come into existence until the 1920s, so if the 19-teens construction estimate is right, the building went up for some other purpose first. The Fred Meyer storefront may already be a remodel, and not very original. (It is no criticism to say that the proposed restoration may not be to original conditions; a 1930s storefront will still be a great improvement! But it's too bad that more height can't be gained here: A single story building now is undersized here and more housing could be stacked on top.)

The address numbering has shifted some also. Mid-century ads for Fred's there use 140 N. Liberty rather than 148 Liberty NE.

So without being at all very important, there are a number of very minor mysteries here!

(Update - Here is more on the building, including evidence that it was built in 1908 and that Fred Meyer moved in 1938.)

Not on the HLC agenda, but related to historic preservation is material on the Depot Addition in the Mission Street Overpass FEIS.

You may know that SESNA was designated Salem's second "heritage neighborhood" a year ago. One of the projects to come out of that was a calendar. 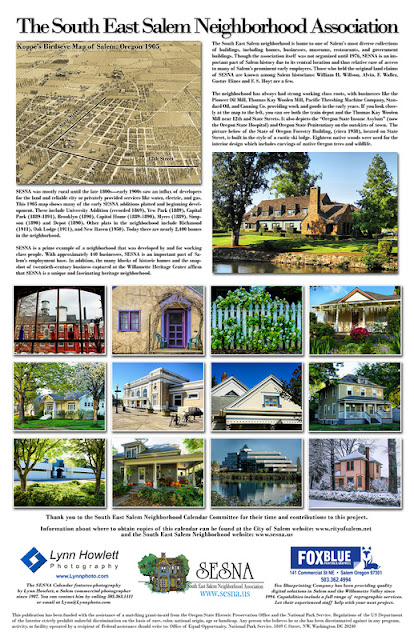 You may not know that a little over a generation ago, the whole of the Depot Addition Neighborhood was considered eligible for a National Register listing.

It seems that this assessment grew out of the 4(f) evaluation for the Mission Street Overpass project published in 1984. 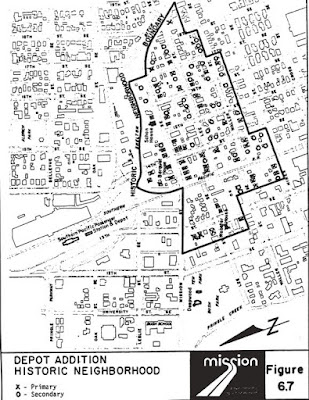 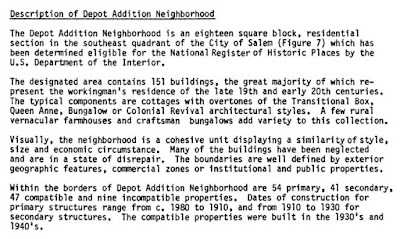 You may already know about the Barquist House, which was moved from the northwest corner of 14th and Mission to the Court-Chemeketa Historic District. The Schon house is something of a mystery. Does anyone know what happened to it?

Generally, though, the neighborhood was dismissed. The City excluded houses here from any urban renewal grants.

They assumed the old homes and buildings would be demolished anyway. 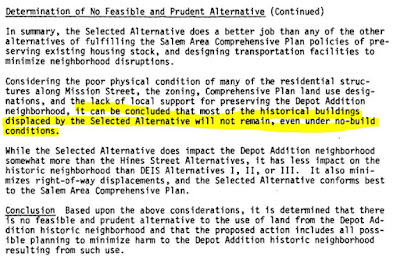 It was not "practical to assume that these houses...would be restored or the neighborhood preserved." There was no point to encouraging investment, it was going to decline organically no matter what, so the overpass and disruption was no big deal. 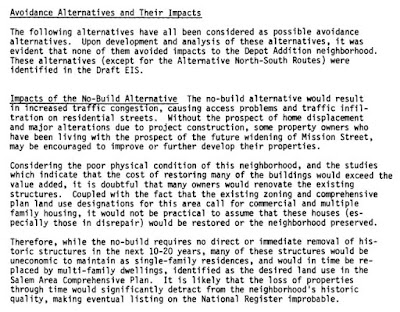 The neighborhood did continue to lose some of the older buildings, but more of them probably have remained than the authors would have expected, and the neighborhood, notwithstanding the giant disruption of the overpass, is increasingly attractive.

And if the overpass was supposed to help spur investment in the neighborhood, well, that never happened.

Mission Street here is part of OR-22 and the railroad was a real problem. Sometimes it is possible to argue that no change was the right course. This is probably not one of them, and some kind of substantial change, a low-build solution, to Mission Street was inevitable. But we still overbuilt the stroad and excessively disrupted the adjacent neighborhoods.

The way the value of this neighborhood, not just abstractly as a stock of historic housing, but as a neighborhood where real people lived, hoped, were born and died, the way this was all dismissed as of no real value should be embarrassing. Our hydraulic autoism just tramples over neighborhoods and the lives in them. We systematically degrade places in order to facilitate placeless through-movement.

(There will be more to say later about the full Mission Street FEIS!)
Posted by Salem Breakfast on Bikes at 7:00 AM

I'm going to disagree with you a bit about the Depot Addition neighborhood. I grew up not far from that area in the 1950s through the 1070's. The area along Mission Street from 12th to 22nd was a slum by any standards.The only real decent homes in that area were a bit further south along Hines. Most of the houses were rentals and some were said to not even have decent floors. Back in 1972 my husband and I looked at renting an apartment in the area and found everything to be not only old, but neglected and dangerous.

Actually, it was reasonable to think the area would be torn down before the Mission Street widening and overpass. But as it turned out the increased sheltering that the bypass created actually helped the neighborhood. It become more sheltered because there was a decrease in traffic cutting through residential streets to get to 12th Street. In the 1980s young families felt it worth investing in some of the better houses. Some went by the wayside, of course, but even more got remodeled.

Sometimes moving cars out of the way helps a neighborhood restore itself.

Also, some of the nice older homes on 12th Street were converted to businesses. That was nice to see.

I recently went by my old home off 22nd. It was a pretty great place to grow up because at the time the neighborhood was new (1953) and there was a lot of open fields for kids to explore and put together a baseball game. But now that it is surrounded by industrial development and heavy traffic, I think it needs to be abandoned. Most of the houses are being neglected, and being a small island in an industrial park is no place for kids to live.

In that case, traffic and industry destroyed a neighborhood...that probably shouldn't have ever been built since it is in a flood plain. That subdivision of about 60 houses got built because of the need for post-war housing, but today, it is not worth saving. I was very disappointed that the City allowed an apartment complex to be built on 23rd. It is not a residential area worth the investment.

(By the way, for anyone who might not know already, the City says: Tonight's Historic Landmarks Commission meeting has been cancelled. The meeting has been rescheduled for Thursday, Jan. 19, 2017.)

I think you are wrong, but at the moment I can't think of decisive evidence, so this here will be just counter-opinion and assertion.

Can you think of other cities where a raised urban highway/expressway structure has "sheltered" and "helped" a neighborhood as you say? If what you say is true, it should be possible to find other examples of it.

And if this generally is true, why aren't the neighborhoods immediately on either side of I-5 more vibrant?

As with the rhetoric of "intrusion" that characterizes our approach to Historic Districts, I think you overrate the deleterious effects of cut-through traffic on causing blight. This is the logic of cul-de-sacs. Cul-de-sac neighborhoods, though, are too often dead and unwalkable, even if they might have pretty houses at first.

Modest amounts of cut-through traffic and circulation resulting from an intact grid might instead have hastened the neighborhood's renewal.

But I will think on this more! Perhaps others will have opinions or evidence also!

Not sure why you dismiss my observations as a local resident so easily to support your point of view, but I will say that what I did notice when the Mission Street widening and bypass took place, instead of cars going through the neighborhoods are fast rates (i.e Hines street especially) the area became more appealing to bike and pedestrian travel. I used to have to bike down other side streets in an attempt to avoid cars until the by-pass and after that I could just go down Hines and connect with 12th and then down Cross to get to Leslie Pool which was my destination most hot summer days. Safer and more pleasant without cars. Probably what attracted those wanting to restore older homes in that area too.

Yikes! That neighborhood looks like a slum now. If this is an improvement I can't imagine how bad it was in Susann's day. But the Mission St. overpass isn't the only thing working against it--the airport, the railroad switchyard, and the city shops all depress potential of this area as a livable neighborhood. Industrial would make more sense here to me. It has many advantages over Fairview, Mill Creek or the other areas the city is trying to bribe companies to develop. The overpass has probably had some impact on 12th and 13th St. development but not in a good way. What little development is happening there is more of the typical cheap Salem low-rise, strippy, auto-oriented garbage. Which is a shame because Salem has so few places that have good access to neighborhoods where people could walk--if we had design standards to support it.

(Edit: Forgot to add and datestamp a note that there's now an update to the Fred Meyer bit here.)