The North Gateway Redevelopment Advisory Board meets next week on Thursday the 5th, and in the meeting packet are some results from the food survey that went out this fall.

There are several interesting details in them, and they might be worth your time. In some cases the details might complicate the urge to flatten things with over-simple narratives about need and meeting the need. (Humans are complicated!)

A couple of transportation things also stand out. 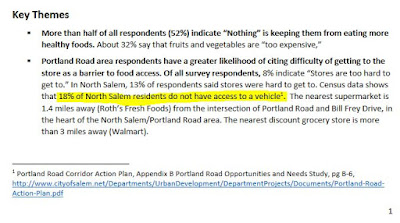 From the summary:
Our nearly compulsory autoism creates real problems for people. 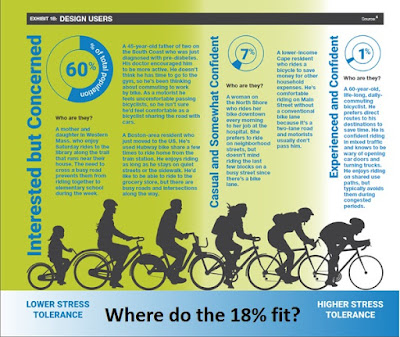 The findings also suggest ways that our advocacy and planning frameworks remain over-simple and insufficiently diverse. Our current typology mainly represents people who have the luxury of choosing whether to bike. For some people biking is a positive status symbol; for others, it is a negative status symbol. Some people who lack access to a car will want to bike if it were more pleasant, but others would rather have a car regardless, and our analytical frameworks generally do not account for much nuance. We do not have a rhetoric of biking advocacy that engages both sides to this - or indeed, much many-sidedness at all. Simply to lump people into a 32%-sized bucket of "no way no how" or "not interested" may not capture important ambivalence or ambiguity.

(Biking is a complicated cultural symbol right now. There is the paradigm of the leisured spandex-clad hobbyist on an expensive bike, as well as the paradigm of the semi-homeless can collector on a bike missing brakes. Autoist discourse uses both sets of stereotypes - and flavors in between - to marginalize people who bike. Police also use enforcement differently, and Streetsblog recently discussed a study of citations from New York City between 2007 and 2015 that showed meaningful differences in policing by neighborhood income and rider ethnicity. When we talk about biking, we are often also talking about other things, many of them hidden to one degree or another.)

Still, we find millions of dollars to widen roads for auto travel by people with plenty of access to automobiles, but if you walk, bike, or bus - you're on your own. You're not really part of the solution.

The North Gateway Redevelopment Advisory Board meets Thursday the 5th at 8:00 AM in the Center 50+, Classroom A, 2615 Portland Road NE.
Posted by Salem Breakfast on Bikes at 1:00 PM

Wealthy and privileged white people in South Salem get millions for a fancy new intersection and interchange to subsidize their expensive autoist habit while brown folks in North Salem fight to survive on inhumane Stroads just to feed their families. Oh yeah.... when wealthy white West Salemites need to save a few minutes on their evening commutes, the City pushes the new highway right though the same brown folks neighborhood. Salem in a nutshell.

Biking is good, but not a realistic option for many people.

We need more realistic options for the poor.