Just when the Luddite mood was waxing to nearly overwhelming proportions, the google nearly randomly turns up an easter egg during a completely unrelated search.

It looks like some NEPA collection at Northwestern University has been digitized, and in it is the Final Environmental Impact Statement from 1979 for our Front Street Bypass.

Read in light of the Salem River Crossing process, there are some interesting ironies.


It is no great insight to note that Front Street cuts off downtown proper from the Riverfront - but they knew this would happen!!!

At the same time, in several places, not just this section on "adverse impacts," they predict the buildings along Front Street would gentrify and increase in tax value.

As we have seen this has been quite a struggle. 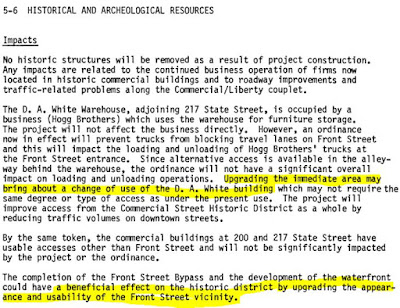 In a discussion of the DA White building, they predict a "beneficial effect...by upgrading the appearance and usability of the Front Street vicinity."

Plainly this has not happened.

Claims for new economic vitality resulting from a highway or expressway expansion need to be read with a very skeptical eye! 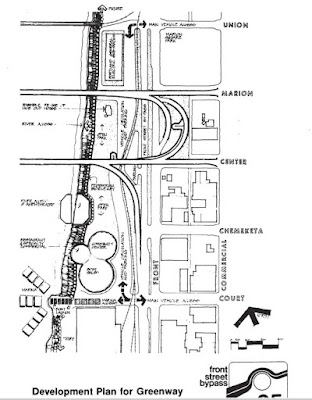 The Greenway Plan for the riverfront is interesting and includes a main entry at Court rather than on the axis and boulevard of State Street. It is very easy to see how some of these concepts and overall framework were developed for the 1984 Salem Tomorrow plan.

But of course this is not the path for riverfront development we ultimately took. And it is important to see how one key belief turned out to be wrong:


Planned commercial land uses along Front Street and west of Liberty Street are expected to be enhanced through better access and traffic control.

This trades on the autoist assumption that the only kind of access that matters is access for those in cars.

But even people arriving by car have to get out and walk. Very few people walk along our zoomy Parkways, along Salem Parkway, the Front Street bypass, the Pringle Parkway, Kuebler Road. Parkways and Major arterials are inimical to people on foot. Until we create streets that actually invite walking, strolling, lingering, even some amount of flaneur-y and loitering, traffic will zoom past the area and further depress sidewalk and commercial life.

Another concept that carried forward to the 1984 study is for a skybridge system.

The Front Street Bypass study makes explicit the link between skybridges and parking garages. The skybridge is really an autoist extension of the parking garage and mall system, and not an independent and valuable thing for people on foot. They function to get people out of the way of cars more than to provide shelter or safety for those on foot. They are about minimizing "pedestrian impedance."

Fortunately, not all were built.
In a recent piece on skyway removal in Minneapolis,


Eric Dayton, Minneapolis resident and son of Minnesota’s governor, disagrees [with the skybridges]. His great-great-grandfather founded Dayton’s department store, which later became Target. Dayton’s downtown Minneapolis location is now a Macy’s that has announced it’s looking for buyers....Dayton has watched countless retailers leave Minneapolis’ downtown core in recent years. When a journalist suggested today’s Dayton’s buy back the Macy’s building and use it to bring back some downtown vibrancy, Eric said he’d be game — if the skyways were gone.

A conversation was sparked. “Is downtown Minneapolis a good environment for investment right now? Do the skyways create structural headwind for retail in downtown Minneapolis?” Dayton asks. “I would argue that it does. As long as they’re in place, that makes me unfortunately not inclined to invest downtown...."

Dayton founded the Skyway Avoidance Society, which asks people to take a pledge that they will walk the sidewalks, not the skyways, in an attempt to bring vitality back to street level.

Vitality arises from people on foot, not those in cars.

It is also interesting to see notes from the "Salem Area Bicycle Advisory Committee." Watching bike committees at the State level and in Portland, and also seeing how the City of Salem uses its advisory committees, I'm not sure they are really necessary or useful. They have to have real power, not just be a social hour to rubber stamp projects or to provide a feeble kind of critique that allows the City to say "we listened to Stakeholders." This one appears to be sponsored by the MPO, an earlier form of SKATS, but the observation remains true at that level as well.

Here in the Bypass FEIS, it seems like even with the Bike Bill in force they struggled just to get bike lanes striped on Liberty and Commercial Streets north of downtown. It was a push just to get a very basic level of coverage, and bike lanes that today we see clearly are far from family-friendly.

One interesting concept was for a rails-to-trails conversion on Trade Street for a real east-west connection. The study also again is very clear on ways that a Front Street Bypass would create additional barriers between the riverfront and downtown, a fact with which we continue to struggle mightily today. 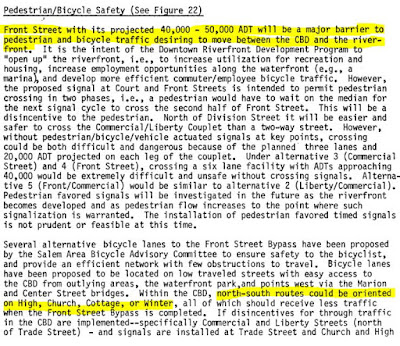 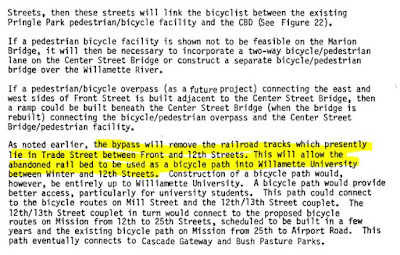 With the buffered bike lanes on Church and High this past summer, a concept from 1979 finally came to fruition.

It's just effing insane that it takes this long.

Maybe we'll come back and look at the traffic projections. Unfortunately when they scanned the study, they did not unfold the maps, and much of the traffic count data is in map form. But it is very interesting how little feedback and assessment we have formalized in any post-plan evaluation. We never go back years, decades later and ask "How did our predictions do?" or "Did this actually accomplish what we wanted it to do?" And most crucially, "Was it worth it?"

And here's some traffic projections. (Remember the maps were not unfolded for digitizing, unfortunately.)

In every instance I looked at, our current actual counts, mostly from the 2010s, are well below projected numbers for year 2000.

But there is one very interesting exception.

The Commercial/Liberty couplet running through downtown north of Trade/Ferry has way more traffic than they projected! What appears to be the case is that they expected the Front Street bypass to carry much more of the north-south traffic than it in fact does. Instead, more of the through-traffic has remained on Liberty and Commercial. Traffic also projected for the High/Church couplet might also have shifted to Liberty/Commercial. The total amount of traffic for Front+Commercial+Liberty still remains below the year 2000 projections, however.

So while the Front Street bypass did less for Commercial/Liberty in downtown than planners had hoped, it is still also true that the total amount of traffic in the downtown system is significantly less than the modeling projected.

This might repay another more in-depth visit, as our current reality in counts just looks so much different from the future envisioned here. Do you see anything especially interesting?
Posted by Salem Breakfast on Bikes at 10:15 AM

The collection is a treasure trove!

The 1984 FEIS for the Mission Street Overpass between 12th and 25th.

And the 1988 FEIS for I-5 widening and interchanges between Hayesville and Battlecreek.

There's surely more interesting history and unfounded autoism in those documents, too! (Perhaps also tidbits about a "third bridge.")

Updated with some comparison of projected year 2000 traffic counts with actual current counts.