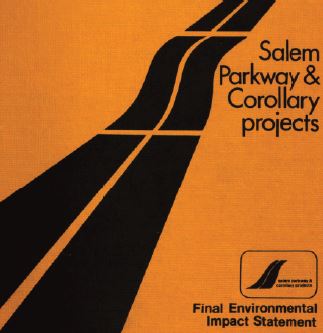 The 1981 FEIS for the Salem Parkway is less interesting than the one for the Front Street Bypass.

One reason is that I was trawling for things about the Salem River Crossing, and it appears to be almost wholly silent on that. (That seems like a significant omission, though.)

So instead, there are lesser things only to note.

The map of discarded alternatives is a little interesting. Some of them would have had much more impact on already developed areas. The route they chose, the "Railroad West," west of the railroad lines, probably did minimize impacts to existing development. But we forget the losses, especially the individual stories of people and families affected, down the memory hole. And now, in currently paused Kroc Center Study, we have contemplated millions for a bridge or other facilities to mend the gap we created.

A pair of the rejects involved a leg on Chemawa/Lockhaven and a turn onto River Road (1 and 2 on the map). 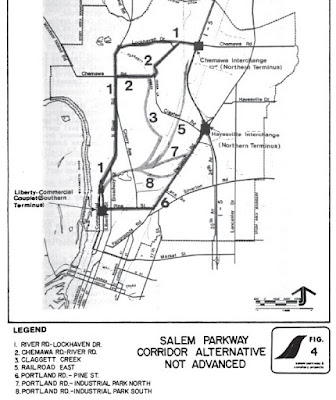 Maybe as we dig into these, and find other things as well, it will be possible to develop a better sense for the path-dependence in the selection of the Preferred Alternative for the SRC.

When the Pringle Parkway was selected, when the Salem Parkway was selected, when Cordon Road was not fully extended along Hazelgreen/Chemawa/Lockhaven (if that was ever formalized) - each of these decisions narrowed the range of probable bridge crossing sites and ultimately pointed to one terminating at the Salem Parkway. There's a sense in which the SRC's present choice of location was pre-determined by all of these prior decisions.

That's something to come back to after accumulating more evidence and history.

(Maybe this is summarized already somewhere, but it's just hard to keep track of all the thousands of pages of documents scattered here and there! The introductory chapters to various plans have history sections, but they seem usually to be simple timelines of previous studies, without much interpretive depth or historical narrative. They don't say "why.")

The short section on "energy" is interesting, and while the model we use today might be a little more complicated, and require more computer horsepower to calculate, the basic paradigm remains the same: "This alternative would require the energy equivalent of nineteen million gallons of gasoline more [than a rejected alternative]." 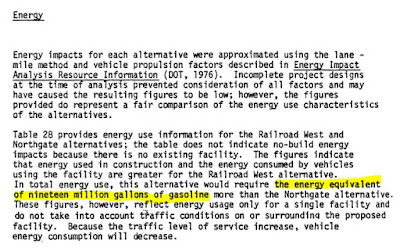 Especially since we do not yet evaluate the carbon footprint of the proposed SRC, it shows how our evaluation framework is very dated, and remains rooted in the thinking of the 1960s and 70s, especially the 70s "energy crisis." A gallon of gas is a nice, concrete measure, of course, but it is interesting that "the table does not indicate no-build energy impacts because there is no existing facility." There's no sense of the real increase and real cost in energy. The inherent goodness of hydraulic autoism is assumed! (Notes on SRC and Energy here and here.)

A few other brief notes.

The way that "alternative modes" are dismissed is practically boilerplate! "Transit alone...cannot meet the demand" etc., etc. These sentences appear with minor adjustments again and again, decade after decade. But we've never actually made a serious attempt to meet needs for mobility by means other than drive-alone trips. It is as if "Of course we already know transit can't meet the demand, but we'll pretend otherwise for a moment of analysis before we circle back the conclusion we already know is true." (More on the SRC here.)

The land use map is also interesting. The UGB looks mostly unchanged, but already in 50 years the shift from streetcar commercial clusters to autoist strip malls on arterials is well entrenched and mostly complete. (Obviously the red is commercial uses.)

Lancaster, however, doesn't seem all that built up yet along its full length. Instead, it has commercial clusters at key intersections. So here's a counter-factual: The 70s might have been a moment that with better land use could have resulted in a stronger, less strippy and less autoist Lancaster. (And underscores the strengths of the current State Street Corridor project, which is looking at a street redesign in tandem with land use and zoning changes. All our corridor studies should do these together now.)

Our demographics are much changed: "Spanish speaking people make up 2.7% of the [larger metro], 1.3% of the City"!

By contrast the DEIS for the Salem River Crossing says in 2010:

For the moment here are the 1979 traffic counts and year 2000 projections. It may be possible later to drill into them and see how things actually turned out! (The population projections for year 2000 turned out to be pretty accurate, well within any reasonable margin of error or rounding.)


If you take a look at it, maybe you will see something else.

Updated with some current traffic counts on year 2000 projections.