Here's a cryptic "whiskey tango foxtrot" for you. 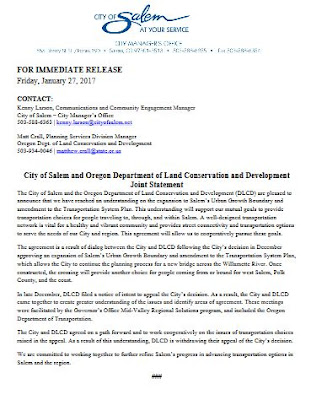 Today the City issued a vaporous press release that is difficult to interpret more than in a very superficial way:

The City of Salem and the Oregon Department of Land Conservation and Development (DLCD) are pleased to announce that we have reached an understanding on the expansion to Salem’s Urban Growth Boundary and amendment to the Transportation System Plan. This understanding will support our mutual goals to provide transportation choices for people traveling to, through, and within Salem. A well-designed transportation network is vital for a healthy and vibrant community and provides street connectivity and transportation options to serve the needs of our City and region. This agreement will allow us to cooperatively pursue these goals.

The agreement is a result of dialog between the City and DLCD following the City’s decision in December approving an expansion of Salem’s Urban Growth Boundary and amendment to the Transportation System Plan, which allows the City to continue the planning process for a new bridge across the Willamette River. Once constructed, the crossing will provide another choice for people coming from or bound for west Salem, Polk County, and the coast.

In late December, DLCD filed a notice of intent to appeal the City’s decision. As a result, the City and DLCD came together to create greater understanding of the issues and identify areas of agreement. These meetings were facilitated by the Governor’s Office Mid-Valley Regional Solutions program, and included the Oregon Department of Transportation.

The City and DLCD agreed on a path forward and to work cooperatively on the issues of transportation choices raised in the appeal. As a result of this understanding, DLCD is withdrawing their appeal of the City’s decision.

We are committed to working together to further refine Salem’s progress in advancing transportation options in Salem and the region.

Does this mean that the Governor and ODOT pressured the DLCD to cave? That's an easy first reading, but perhaps it's wrong. The lack of detail here is concerning. Things like "areas of agreement" should be spelled out.

The rhetoric of "transportation options" is interesting, though. On the one hand the first "choice" mentioned is about trips to the coast. That's just another word for driving. The statement also talks about the bridge "once constructed," as if the City now had certainty.

But "transportation choice" has also meant walking, biking, and busing.

We should also remember the fight the City conducted with DLCD from 2002 to 2009 on "periodic review." The City did not cooperate and stonewalled. Finally DLCD caved.

So there are several reasons to be suspicious.

Today's statement is ambiguous and not at all useful for the public.  The statement looks like spin and balderdash more than substance.

As more detail comes out, this post may be updated.

Update - Here's the meat of the Memorandum of Understanding.

A. City obligations:
Also included are a couple of "mutual obligations," including an


Intergovernmental Agreement. Within 90 days of execution of this MOU, the parties will execute an intergovernmental agreement (IGA) as authorized by ORS 190.110 refining and clarifying the obligations and commitments contained herein.

A(2) on "congestion pricing" is interesting, but most of the others don't seem all that strong, mostly just slightly emphasized things the City is already supposed to do. This seems like it might have been a missed opportunity for DLCD to extract some real concessions. This seems tepid still.

More thoughts later...
Posted by Salem Breakfast on Bikes at 10:00 AM

It is really sad and embarrassing that City of Salem staff don't recognize and embrace the opportunities they have under the Oregon land use system to make Salem a truly unique and exceptional place. Instead they choose to devote their talents, time and energy into keeping Salem mediocre. It doesn't appear that we are going to get much a change in culture with the new City Manager either.

Here are more thoughts on the terms of the agreement."