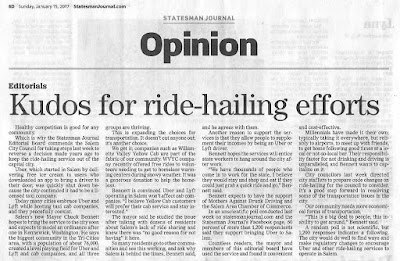 The paper came out yesterday with an editorial in favor of loosening regulations on ride-booking companies.

It's interesting in a number of ways.

It still can't quite seem to conform to the AP stylebook, which calls for "ride booking" or "ride hailing" and is clear that "sharing" is not what is going on.

Nevertheless, the editorial talks about "Salem's lack of ride sharing."

It talks about "choice" and "competition" but it doesn't recognize the ways that choice is already profoundly constrained for non-auto users and that there already is far from a level playing field. Most of our conversation and debate about ride-booking resolve questions about mobility into autoist configurations and flatten out or eliminate other kinds of mobility.

Mayor Bennett also makes a novel claim that would be interesting to learn more about:


"We have thousands of people who come in to work for the state, I believe they would stay and shop and eat if they could just grab a quick ride and go."

What is going on here? Where is the trip start and end in this concept?
Neither of these seem very likely. Ride-booking for commuting seems very expensive, and the Capitol Mall is not far from downtown, an easy walk. So perhaps he means something else. It's hard to see what problem ride-booking would actually solve in this scenario, and how it would in actuality deliver "thousands of people," or any meaningful subset, to downtown from State offices.

Finally the editorial mentions that "Millennials have made it their own," and perhaps here we are getting to something deeper and more interesting.

It's increasingly clear that ride-booking is an emblem and signal, for cities and for users, in addition to ways it may or may not be a realistic transportation solution.

Over on the radio, a few days ago the hosts of Gator's Radio Experience said (mp3s of show hour 1, hour 2):


Ride Share businesses get a bump to the curve from the Anti-Progress Progressives; Gator & Denise bump back!...

the free market of transportation options is being bullied OUT of cities. Literally, buses and taxis and bicycle proponents in Salem are fighting against the inclusion of Ride Share programs such as UBER and LYFT.

But in fact the situation is quite the opposite!

Ride-booking companies also skate along on a huge amount of subsidy. Whether it is investors subsidizing huge billion-dollar losses, or the public subsidizing the companies on underpriced road use, underpriced gas, and free parking, there is no free market here. Instead we have an interlocking system of market failures and subsidies, with too many costs externalized and not captured in the pricing and in the marketplace. Moreover, our system of nearly compulsory autoism penalizes those who would like to do without cars. Until we have fully functional bus and bike networks, there is very little sense in which it is possible to "bully" these autoists. Finally, autoists of all stripes are the ones who employ lethal force, not the people on foot and on bike. There is a strange sense of "bully" here in the radio remarks.

But counter-factually and moving into myth, the "free market magic" of "ride sharing" is now something of an identity position.

So this is an interesting development that had not fully registered. (Maybe it's trivial old news to you, but it's new here.) Just as we have the trope of the scofflaw cyclist, whether the can collector with a broken down bike, or the entitled spandex hobbyist on an expensive bike, images that people use to signal certain notions about bikes and their riders, and to maintain in-group boundaries, now we have the trope of the embattled free-marketer or Millennial who just wants a little bit of "freedom" to "share" a ride - never mind the companies' own scofflawery. (Or the actual freedom that comes from riding a bike!)

This does not seem to be a debate amenable to fact and rational discourse. Instead it is now a matter of tribal affiliation and identity. I don't know how we break through that.

Does Kenniwick Provide a Model?

Coming back to the specifics here, the editorial appeals to the example of Kennewick, Washington, which apparently may offer a model ordinance.

So let's consider that a little in hopes that some fact or argument might still be worthwhile (and maybe there will be more to say in detail later).

According to the Tri-City Herald, there was lots of debate and wrangling this summer, and after an agreement was hammered out, service legally started last month on December 15th.

It is perhaps relevant to note that while the Tri-Cities have Saturday bus service, all service, weekday and Saturday, ends at 6pm. There is no evening bus service.

A more interesting question now is, what happens to the prospect of evening bus service in Kennewick?

The debate has been often about medallions and monopolies, about the ways that the supply of taxis has been artificially constrained by cities, and that ride-booking companies are a needed disruption to a distorted market.

Supporting local business is important, notwithstanding the ways that taxi regulations might in fact be anti-competitive, and it is right that taxi companies should have a place at the table in crafting regulations that work for all parties and lead to a level playing field in that regard.

Thinking about the Total Transportation Mix

But the larger, and more important question, one that Cherriots' consultant Jarrett Walker has raised, is what impacts do ride-booking companies have on transit? Is our current approach to ride-booking just going to sell out transit? He cites Henry Grabar at Slate:


[ride-booking] is invoked, as you might expect, in bad faith by [people] who have advocated against public investment for decades.* But even pro-transit politicians and officials have begun to see ride-hailing services as an acceptable substitute for public transit.

If we go all-in on ride-booking now, what impact does that have on our ability to fund any expansion of Cherriots for evening service, weekend service, more frequent service, or better coverage? By underpricing their services, ride-booking companies may very well want to drive other choices out of the marketplace. What looks like a near-term addition of choices may mask a drive for long-term reduction in choices.

And is less than a month of service in Kennewick anywhere close to enough time to evaluate whether it and its code truly can serve as a model?

Council should consider going ahead and preparing TNC regulations, but holding off on voting them in until a suite of rational transportation policy initiatives can be assembled, things like:
Why not use TNC action as a carrot for some real policy reform rather than just simply as capitulation? In particular, make the Chamber support Cherriots in real, durable, funded ways, in exchange for approving TNC regulations! Horse-trade! Quid-pro-quo! Use the opportunity for leverage that might be present here.

* Over at the Antiplanner, a great Transit Foe and Autoist has a helpful guide to a common set of complaints and arguments against transit. These are useful to keep in mind, and it's not like all the points are wrong; some of the criticism is on target and substantive. Strong Towns just tweeted about #5, "Our Cities aren't Built for It," though they probably draw slightly different conclusions from this observation: Rather than simply doubling down on autoism, we might want to consider (re)building more of our cities for transit, biking, and walking. (But more on this is another post perhaps!)


Not all State employees work on the Capitol Mall.

The State has many office buildings around the Salem-Keizer area, some in areas without many lunch-time options.

Ok. Let's use ODOT for this!

So ODOT has facilities on State Street between 25th and Airport Way and also on Fairview Industrial Drive. These sites don't seem very rich with lunch-time options.

So are you suggesting that people who most likely have driven cars to these sites on their commute would prefer to book a ride and be driven to lunch rather than to drive their own car?

Is there really demand and need for this?

"Mayor Ted Wheeler is reaching out to mayors across Oregon and the country regarding recent reports that Uber used the Greyball tool to evade authorities in order to operate in locations where Uber service was resisted or banned."

From a City of Portland Statement.