If you happen to be down in Eugene today, Thursday the 2nd, the City of Eugene will be having an Open House to present the draft of a Vision Zero Action Plan.

Salem has also released a summary on a new Pedestrian Safety Study. 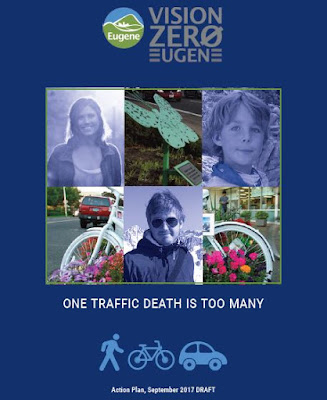 You can also download the plan from the Vision Zero project page.

Scattered throughout are memorials to people killed on Eugene roads. They aren't just abstract numbers. 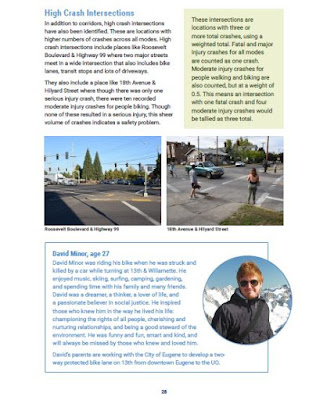 One important set of recommendations is to lower speeds, both posted speeds and design speeds. 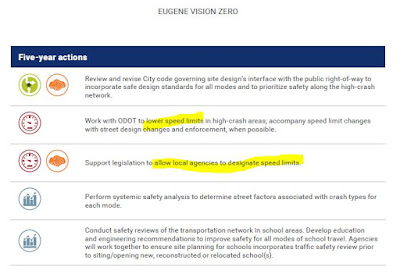 It will be interesting to see how Eugene revises the plan and whether it fully comes to grips with the costs of autoism. Sometimes it reads a little quick to blame people on foot and on bike. A real Vision Zero strategy has to come to grips with the asymmetry of power and lethality among different users. It's driving that kills, not walking or biking. The plan may not do enough to reduce driving distances, frequency, and speeds.

For Salemites, it's worth reading as a model for a project we might undertake and commitment we might make.

Meanwhile, the City of Salem has released an Executive Summary for a study on walking safety.

It's only two pages, however. (Update - Here's the full study, and the summary.)

And while it mentions speeding, but does not discuss reducing posted speeds and design speeds. It also focuses more on jaywalking than jaydriving.


"Many pedestrians were seen crossing mid-block at undesired locations or crossing against the pedestrian signal. This trend is supported by the crash data that indicates 65% of nonintersection pedestrian crashes involved pedestrians illegally in the roadway."

There's more than a little bit of victim-blaming in that. More than anything it keeps intact and does not disturb the framework of autoism.

There will also be a presentation later this month:


On November 13, the City will host a brown-bag meeting to present the findings of this study and to provide a Question & Answer session. This meeting is open to the public and will be held at Noon in the Salem Public Library Anderson Rooms.

At the annual conference of the National Association of City Transportation Officials, historian Peter Norton talked about the early 20th century campaign to criminalize jaywalking and the threat of a second wave.

When the City releases the full report, we'll come back to this, but it certainly looks like its focus is on the "illegal" behavior of pedestrians and not on the question of how best to provide for safe and comfortable walking in Salem.
Posted by Salem Breakfast on Bikes at 7:00 AM

Email ThisBlogThis!Share to TwitterShare to FacebookShare to Pinterest
Labels: Eugene

(added a NACTO clip from Peter Norton's talk on jaywalking)

You should edit the blog post to note that the full report (21 pages + appendix) is also available on the city's webpage at
http://www.cityofsalem.net/CityDocuments/salem-pedestrian-safety-study-2017.pdf

City council meetings require a public comment period, so citizens can voice their opinions about the Pedestrian Safety Study or pedestrian safety in general that evening.

From Salem's Facebook page:
Findings and recommendations from the Pedestrian Safety Study will also be presented at the November 13, 2017 (Monday) City Council Work Session. The Council work session will be held at 5 p.m. in Council Chambers, 555 Liberty Street SE. Council work sessions and meetings are also broadcast live by CCTV Salem on cable channel 21, and live streamed on the CCTV YouTube page (youtube.com/user/cctvsalem/) and City of Salem Facebook Page (facebook.com/CityOfSalemOR/).

I also think you should change the title of your blog post. Salem didn't release a "Walking Study" (where people walk, how many, etc.) but a "Pedestrian Safety Study". Much different!

to the first two Anon comments - thanks for the updates and corrections. There will be a considerably longer post nearer to the 13th and with more detail and comment on the full study.

To the third, re: Walking vs. Pedestrian. The word "pedestrian" is used as part of a professionalized guild vocabulary that also serves to marginalize people on foot. It's all captured by the notion of "pedestrian impedance." So here we try to use the word "walking" as much as possible, since that is actually the activity in which most humans recognize themselves. So in that sense it is a "walking" study rather than a "pedestrian study," even if it seems like it is limited by the engineering sense of "pedestrian" - and in this way more accurately called a "pedestrian" study.

I think you are reading way too much in your meaning of pedestrian; most people over the age of 14 know what a pedestrian is and what it means. But your opinion is your opinion. Still, the emphasis of the post is safety, so "Walking Safety Study" would be better than just "Walking Study".