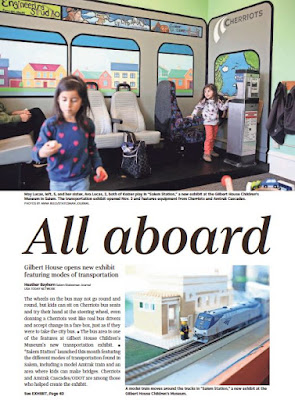 Love the way the SJ piece on the new Gilbert House exhibit on transportation leads with Cherriots and Amtrak. Make 'em love the bus adventure early!

In The Automobile and Urban Transit: The Formation of Public Policy in Chicago, 1900-1930 we can see how the signalling or status function of bus riding has changed over time.

Nowadays we still struggle with an image of the bus as second-class transport for those who can't afford adult transportation.

It's like yesterday's piece in The Onion on reducing bike crashes - just substitute the word "bus":


“Our data confirm that the vast majority of cyclist injuries can be avoided simply by driving an automobile instead of biking around like some weirdo,” said lead researcher Dr. Laura Gafferty....“Regular people drive cars because it’s the normal and not the abnormal thing to do. If every cyclist purchased and operated a car like you’re supposed to as an adult, bike fatalities would drop an estimated 40 percent within six months alone.”

More seriously, the Safe Routes to School partnership is looking to hire for a new position:


The Pacific Northwest Regional Policy Manager (Salem/Eugene) will build on existing work in the Pacific Northwest region, concentrating on expanding the regional network in Salem-Keizer and Central Lane areas. The primary focus of this position is to increase funding and improve policies that result in the prioritization of more infrastructure and programs to support safe walking and bicycling for children and families, especially in lower-income, underserved, and historically marginalized communities.

It will be interesting to see if the hire is based in Eugene or in Salem. On the surface, it would seem like Eugene probably was going to be the big focus area and an easier lift. But maybe the untapped potential in Salem, as well as its status as HQ for State agencies, would give it the edge. Anyway, see the full job description here, and BikePortland has a full job advertisement. This could be a very exciting development.

The City says the light at Union Street and Commercial is going live tomorrow!!!

On Wednesday, November 15, 2017, the City will activate a new traffic signal at the intersection of Union Street NE and Commercial Street NE. The new signal increases safety for bicyclists and pedestrians traveling between the Union Street Railroad Bridge and downtown Salem. The City also improved lighting, added crosswalks, built curb extensions and a median island to further improve safety at the crossing.

Vehicles eastbound on Union Street NE will now be directed southbound-only onto Commercial Street NE. A blue light indicator for bicycles traveling across the intersection from west to east was also added.

The completion of this project delivers on a priority Salem residents identified in the 2013 Central Salem Mobility Study. According to project engineer Julie Titchbourne, the signal is the first step in connecting the Union Street Bridge with 12th ST as part of the Family-Friendly Bikeway. The $1.13-million intersection improvement began in June and is jointly funded by the Riverfront-Downtown Urban Renewal Area and the Salem-Keizer Area Study Metropolitan Planning Organization.

Email ThisBlogThis!Share to TwitterShare to FacebookShare to Pinterest
Labels: Safe Routes to Schools

Can you check in with the city. This morning east bound on Union I sat at the bike light for two full cycles on the lights at Division and Commercial and Marion and Commercial with no change in the Red east bound light on Union. There were no cars going east or west on Union and no pedestrians using the cross walk. So I on a bike had no way to activate the light. Luckily a city worker and one of the contractors were there, so I stopped to talk. I asked what it takes to activate the intersection on a bike. The city guy said it is not working yet. He said there will be a light to detect bikes and activate the system, but it won't be activated until March. So for now I'll still have to run the red light when it is safe or make my way for the pedestrian plunger confusing everyone involved at the light. Can we put pressure on the city to activate it sooner? The current situation feels more dangerous than no light at all. Oh and in the evening cars traveling south bound on Commercial still block the intersection.