On August 30, 2018 at approximately 7:30 pm Salem police officers and Salem firefighters responded to State Street and 12th Street on the report of a bicyclist being struck by a train. The male cyclist was declared deceased at the scene by medics.

Witnesses reported that the male cyclist had been riding westbound on State Street when he approached the railroad crossing and was struck by a southbound Amtrak passenger train. Based on the initial investigation, it appears that the railroad warnings and barriers were functioning at the time of the collision.

The deceased's identity will not be released until his next of kin have been notified.

It is anticipated that eastbound State Street at 12th Street will be closed for the next few hours while the investigation is completed.

As the release says, State Street is eastbound here, so a person riding westbound is either going against traffic or is on the sidewalk. And the lack of bike lanes on the Court/State couplet may compound any errors in judgement or perception. Hard to say very much until we know more. 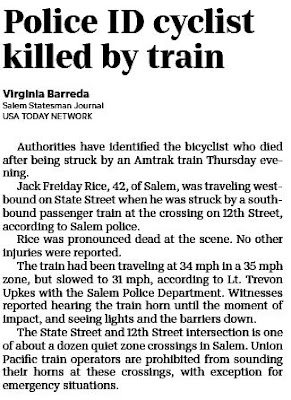 This post will be updated as more information comes out.
Posted by Salem Breakfast on Bikes at 7:00 AM

We will never know (in all likelihood) whether this was unintended and caused by failure to judge the physics of motion correctly or was suicide by train.

Sadly, most train personnel have experienced people who commit suicide by intentionally putting themselves on the tracks within the train’s loooooooong stopping distance. I feel dread and anguish for the poor train engineer made to be part of that either way.

And either way, this is a reminder of the fragility of life and how we design relentlessly for safety of cars, the world is much more dangerous for people outside those carapaces. Where there is mass moving at high speed, a failure to give the massive object the right of way can mean the end for the weaker pedestrian or bicyclist in an instant.

I was riding east on State about 10 p.m. last night and got stopped on the esplanade by a single line of yellow police tape stretched across it, but saw no evidence of anything else — I thought it was maybe a prank, but decided to go around anyway. (They just didn’t take down the crime scene barriers carefully.)

(Updated with clip from paper)

I cross the tracks on 12th St. often and the gates come down well before the train comes. It seems to me you would have to go past them to be on the tracks when the train came unless you got stuck there for some reason. It was sad. I actually biked by the scene shortly after it happened and saw the covered body still laying in the street. Pretty unnerving.

The family posted a sign with a picture of the victim today right at the break in the fence where the foot/bike path leads across the tracks. It includes a large photo, and text saying something like “This crossing is confusing, be careful!” An effort to warn others.

Updated with the memorial sign and a revised headline.