CANDO, NEN, and the Planning Commission all meet tomorrow the 21st, and they have several items of interest on their agenda.

CANDO will discuss a "Motion to recommend City Council retain Winter Street SE between Ferry and Bellevue in the Pay to Park District." You might remember that Willamette University wants that stretch to remain free. (See notes here and some CANDO comment here on expectations for free parking.)

Last month they also heard from


Jayne Downing about the Center for Hope and Safety’s development of the old Greyhound Bus station next door, which will soon be raised [razed?] to make room for Hope Plaza, a three-story, mixed-use building intended to serve survivors of domestic violence and sexual exploitation no longer under safety threats. The project, which is set to begin construction in 2020, envisions first floor businesses offering services such as job training. The upper floors will consist of meeting rooms and 20 low-income apartments, with an interior courtyard.

It's a bit of a bummer that the mid-century storefronts and bus station can't be reused, but adding 20 apartments and the other components sounds like a winning package in total. It's hard to be too cranky about prospects for that demolition. There is a mural, however, on the wall of an old jazz club or something inside there, and some thought should be given to documenting that at least in photos. There's probably some interesting mid-century history to record.

Not on the agenda, but an important project downtown, and likely to be on a future agenda...the first permit applications are being submitted for redeveloping the gravel lot on State and Commercial! There will be more to say as the project gets farther along. One important piece is a reduction in the parking requirements, as most of the residences will be studios and explicitly aimed at car-free or car-lite living. This is likely to be contested by MOAR PARKING advocates, and the City could do a better job messaging about the trade-off: We can have more people housing at a lower cost; or, requirements for more car housing cause less people housing and at a higher cost per unit. Car housing raises the cost and space requirements of people housing.

Earlier this month there was a nice history piece on the corner, and the way the project fits into the historic district will be important. (But also remember a dumb drive-thru bank window was proposed and approved a few years back, and this is almost necessarily an improvement on that, no matter what the style and ornament might be. There was also a previous mixed-use project that has been abandoned. See notes from earlier this year when this project was first announced.) 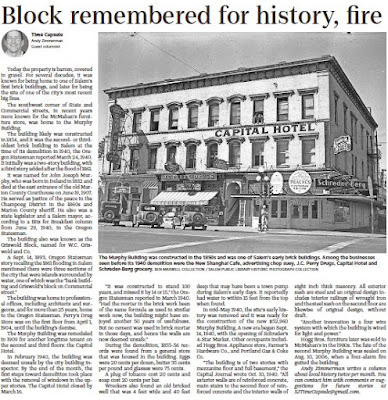 Last month NEN was supposed to see concept drawings for the North Campus of the State Hospital, but it was postponed to this month. See last month's comments for more detail.

This is an important development in Salem, and there is a potential conflict at Salem Reporter, so it will be very interesting to see how they cover the project. When people have some concerns about an editorial firewall or bias there, this is a topic where it could matter.

Last month's minutes also discuss the proposal for a park near 21st on State Street. They confirm it would be the creekside lot on the south side of the street. More creek access would be a good thing, even if it might be a loss in redeveloping the street.

They'll be looking at the site and design review on a horizontally mixed-use project for 48 apartments and two small strip malls on the corner of Riverbend and Wallace Roads NW. (Here's the previous round of zoning changes from January.)

They've made some effort towards tree preservation, but it's still awfully car oriented.

It's hard to know what to make of this area. Across the street is an old farmhouse and little vineyard. Just to the north there is that under-utilized Cherriots park-n-ride lot and a convenience store. The area could develop into a larger transit hub.

But there's not much here that is actually walkable or bikeable, though - not for large numbers of people anyway. Sure, it's possible to bike down Wallace, but that sucks. Only very confident riders will do that.

It's also not clear what kind of businesses will want to go into the little strip malls. Will it be more than coffee shops and another convenience store? Will it become a meaningful center of neighborhood commercial activity, something that people will want to walk to?

And what's going to happen with that little cut-out by the bus turn-out?

Maybe you can see possible trajectories for development more clearly. The notion of neighborhood-scaled commercial district here has been in the West Salem Plan for well over a decade, but the main spine of connectivity is all Wallace Road. Maybe this project will spur other projects, however. And there is that Cherriots lot again.

From here it's an interesting area, but not obviously a promising one. When I think of walkable, mixed-use and neighborhood-scaled development in West Salem, I think of things farther in the interior, like the apparently abandoned proposal for Doaks Ferry & Orchard Heights. Things on more walkable collector or minor arterial streets rather than on large stroads that are major arterials and function as State Highways. Development along Wallace Road, even a ways out like this one, is just a move towards the autoist pattern of South Commercial or Lancaster Drive. I know the driveway is off Riverbend, not off Wallace, but still this does not seem different enough. We'll see, I guess.

The Planning Commission meets at 5:30pm on Tuesday the 21st in Council Chambers at City Hall.
Posted by Salem Breakfast on Bikes at 12:01 PM

Forgot about this matter back in May at Council, directing staff to "develop a residential permit program for the four downtown parking structures for Council consideration."

Here's the approval and decision on the Riverbend Road NW project.