Just a quick hit from the morning paper... 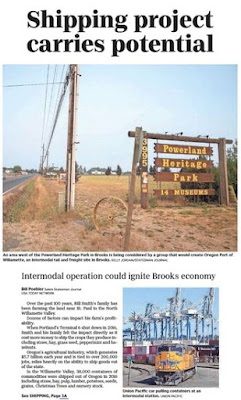 The proposal for the Brooks-Hopmere Intermodal Facility is worth noting. It would be a transfer site for loading freight from truck to rail as a better way to reach more distant ports for international shipments. With the Port of Portland's struggles, this would make reaching larger ports easier than long slogs up and down I-5. The Brooks-Hopemere site is sandwiched between the Portland & Western (old Oregon Electric) and the main Union Pacific lines, at least on the surface giving the appearance of flexibility and versatility.

This has been percolating for a while, so it's not exactly new news. The pre-proposal packets largely date from November and December:
In July the Capital Press had a piece that went into more detail on potential problems, one of them being a mismatch with the source and flow of empty containers, another the existence of transfer facilities already in the Portland area, and both the SJ and CP pieces are worth a read.

This would be a significant regional transportation hub, and even if it's outside the usual Salem and urban focus here, it is worth knowing about.
Posted by Salem Breakfast on Bikes at 8:30 AM

The OTC met earlier this week, and the SJ reports it's Millersburg: