Proposal for New Project Scoring and Goal 7 in the RTSP: At the MPO

The Technical Advisory Committee for our local Metropolitan Planning Organization meets tomorrow, Tuesday the 14th, and they will have a conversation about a proposal for a new process and scoring for likely to be funded projects - the "fiscally constrained project list" as opposed to broader wish lists - in the Regional Transportation System Plan.

The proposal is in draft form and early discussion at the moment, and it may not be important to dig too far into it.

But what is interesting is that the proposed process includes scoring projects against the formal Goals in the RTSP. Previously the Goals haven't been so directly related to projects in the plan; they just floated out there as "goals." This will change to some degree:


With the passage of MAP-21 (Moving Ahead for Progress in the 21st Century), a new requirement was introduced for state department of transportations (DOTs) and metropolitan planning organizations (MPOs) to use an outcomes-based performance-based planning and programming approach in developing their long-range plans and short-range improvement programs.

You may remember that Goal 7, with a proposal to include greenhouse gas emissions, is quite contested just now (previously here, here, and here).

The proposed process, and prospect of scoring projects against greenhouse gas reductions, may account for some of the resistance to the proposals for new language in Goal 7. Previously the goals had just been mostly window dressing, but now there might be some teeth and accountability behind them. It had been a little difficult to understand the scope of resistance, but now it is a little clearer.

So this proposed matrix could be a real reason to insist on a more robust version of Goal 7.

There is also on the agenda a discussion of Environmental Justice procedures. There might be more to say another time. No People of Color sit on the Policy Committee and the EJ process kicks in late in project evaluation. It's always "We want to build this big highway. Can we minimize impacts?" But never "What is it that disadvantaged communities themselves really want?" (Things like free and better bus service might score more highly than new highways, for example.) Rather than an overlay of Environmental Justice analysis and process on an existing set of procedures, EJ considerations should be knit more deeply and earlier into the whole politics. It really needs a more fundamental, structural rethink. But that's a large topic for another time.

While the big news at the meeting of the Oregon Transportation Commission this week was authorization to move forward with an application for tolling on I-5 and I-205, there was also an interesting letter from three other agencies, DEQ, DLCD, and Energy on greenhouse gases and transportation. 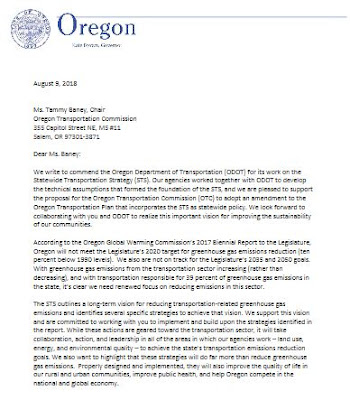 We'll come back to this in later posts.
Posted by Salem Breakfast on Bikes at 8:00 AM

Thank for this informative post. Regarding the "Evaluation Criteria" table, I assume they meant to say CO2? What is CMAQ?

I have been to several meetings where Goal 7 was discussed. My observation is that the "resistance" comes mostly from Marion County Commissioner Sam Brentano who is a flat-out anthropogenic climate change denier in the Trumpian mold. His colleague Kevin Cameron is too. Cameron said so at a candidate forum a few months ago. At the last SKATS PC meeting Commissioner Brentano stated that Marion County would never approve a new RTSP that had the phase 'greenhouse gases' anywhere in the text. That's how strongly he feels about it.

Briefly - more later maybe - Nope. They mean CO, not CO2. Carbon Monoxide is a Clean Air Act "criteria pollutant" and the Congestion Management Air Quality (or something like that) program from many years ago covers CO, Ozone, and particulates. It's a framework that could be extended for CO2, but has not. See FHWA for more on CMAQ.

CMAQ = Congestion Mitigation and Air Quality. CMAQ is an improvement program, with funds to be used in areas that are either in non-attainment or maintenance of a criteria pollutant. Years ago, SKATS used to be non-attainment of the Carbon Monoxide (CO) air quality standard, but improvements (primarily in vehicle emission technology) has reduced CO levels to a small fraction of what they used to be. SKATS is currently a CO Maintenance Area, and receives some CMAQ federal funds. SKATS must demonstrate that the projects funded by CMAQ will reduce CO emissions.

California is burning. Oregon is burning. We haven't had a good rain since May. It's supposed to get to 99 degrees today. What a colossal failure of public policy if we care about CO and not CO2. Our great-grandchildren will rightfully hold us in contempt for this.

Added a clip from a letter DEQ, DLCD, and Energy wrote to the Oregon Transportation Commission with concerns that we aren't doing enough on greenhouse gas emissions in the transportation sector.