The Prospect of more Biking on Paths in Salem

Things are still slow at the start of the new year, and without much in the way of substantive things to think about, maybe it is a little interesting to consider - even overreact to, since there's not enough talk yet to conclude there's a legitimate trend really - recent murmurs about biking on path systems.

You might recall the proposal for a temporary path on a Marine Drive alignment from the past couple of years in the SRC debate.

More recently, though we haven't yet seen a list of proposed bike share stations from Capitol City Cycleshare or from the City, last month they posted a note from one of the charettes for the update to the Riverfront Park Plan, and it showed some docking stations in the park itself.

Over on the Council FB group, a person posted a note about Dutch "cycle highways," and in response another person writes:


I am so frustrated with ODOT and their Bicycle Planning office. They insist that bikes be in bike lanes within the right of way. Local governments follow those rules. As a bicyclist I always considered that dangerous, i.e. being passed by semi-trucks by inches. We've had kids killed in Salem by passing trucks. The Radburn system simply plans vehicular roads as separate from pedestrian bike paths. Again, Sunriver or Black Butte are local examples of communities that are intelligently planned. I worked on Livingston new town. Other good examples are Stevenage, Harlow, and Cumbernauld. The last one is a Scottish hill town with the shops at the top of the hill, then radiating paths to the neighborhoods. Vehicles are a totally separate network, with of course no sidewalks.There are some good ones in Sweden and Denmark also.

So there's a small cluster of some sentiment in favor putting bikes on dedicated paths apart from the street system.

That sounds great, but there are reasons it might be concerning.

Should we really Promote Biking in Riverfront Park?

First, with regard to Riverfront Park, is the park path system really somewhere we want to promote bikes?

Except for crossing the Union Street Railroad Bridge, most of the time when I am in the park I am on foot. And while it is easy to tolerate children who are biking or learning to bike, there are too many adults on bikes who inconsiderately crowd people walking. Whether they wobble into your walking trajectory, impolitely make circles and consume too much path space, or decided that the path system is a great place for fitness or to practice zooming or racing, I find that adults on bike too often hog or crowd space on the path system.

But because so far we have limited interest in creating a first-class system of bike lanes on our streets, we shunt a lot of bicycling activity onto our path system and degrade the experience for people on foot.

I have misgivings about putting bike share stations in the park and really encouraging biking in the park. I don't think they should be excluded, but if we are going to institutionalize bikes in the parks, we may need to give more thought to dashed lines separating biking and walking, or widening some paths, or a strong effort to enforce polite leash-holding and speed limits. (The dog-walkers are also space hogs sometimes!)


From "the Radburn Association: A Town for the Motor Age"


Radburn, a planned community, was started in 1929 by the City Housing Corporation from the plans developed by Clarence Stein and Henry Wright. The concept of the "new town" grew out of the older planned communities in Europe and the work of Ebenezer Howard and Patrick Geddes. The intent was to build a community which made provisions for the complexities of modern life, while still providing the amenities of open space, community service and economic viability....

The residential areas include every type of housing unit with a wide range of cost. The basic layout of the community introduced the "super-block" concept, cul-de-sac (cluster) grouping, interior parklands, and separation of vehicular and pedestrian traffic to promote safety. Every home was planned with access to park walks.

One of the keys here is that Radburn is a suburb away from a downtown or other commercial center. Similarly Black Butte and Sunriver are resort communities and also lack a downtown or commercial center. While walking and biking is attractive on these path systems, it is recreational in nature and cannot generally be used for commuting to work or conducting ordinary errands. Radburn is clear about this: "A Town for the Motor Age." If the path system offers a comfortable separation from cars, cars also don't have to contend with those walking or biking. The path system is a different kind of Pedestrian Displacement System. It gets people out of the way so cars can zoom along, unimpeded. It is a greener and suburban version of this promise for a city without a stop. Note all the cul-de-sac development and again the lack of a downtown. Radburn is essentially car-dependent (Walkscore rates it "somewhat walkable" with "some transit." They do not offer a bike score.)

As it happens, Salem used to have a more ambitious path plan. The 1999 Parks Master Plan had notions about several trail connections, many of them rails-to-trails conversions. Most of these have not had progress, and some of them, like the Geer line, have become nearly impossible now. Others, like the Kroc Center connection across the Parkway or a footbridge between Minto and West Salem have become more expensive in the intervening years. Our streets are already available right-of-way. The trail system would rely on railroad easements, right-of-way purchases, or other elements of property that are not already available to the City.

But right now there are big problems with the linear park and trail concept. Typically we buffer trails with vacant greenspace. No businesses or homes or other traffic immediately border them or open onto them with eyes and ears. Our crisis in housing has made these hidden paths and greenspaces attractive for camping.

Some campers are benign.

Others are not. Problems range from garbage to mobile bike chop shops and other petty crime. This is visible in Portland on the Springwater and in Eugene on the Fern Ridge systems.

Without an effective housing strategy, path systems seemingly offer a partial and unsanctioned solution as grounds for camping.

This is an important reason I want to bike near traffic. I don't like being in zoomy traffic, but I prefer being in a low-traffic environment or being near traffic. Cars can kill you, sure, but if something bad happens, a person on in a car can call 911 or otherwise help. The proxmity of traffic is also eyes and ears and can help dissuade petty crime. Sometimes on a path system you are simply too isolated. I would not myself bike through Minto Park at night, for example, not matter how great is the new Minto Bridge and the associated path system. It's great for the daylight, but in the dark is not at all an alternative for River Road.

Finally, the comment, "Vehicles are a totally separate network, with of course no sidewalks." But even imperfectly executed, we put bike lanes on busy streets and sidewalks on busy streets because these streets are rich with destinations a person might wish to visit. A path system, however glorious with linear parks and greenspace, that bypasses commercial districts is not useful. People in cars and people on bike want to go to the same places! A completely segregated path system denies the value of utility cycling.

Path systems don't help all of these user groups equally.

So when I see lots of support for a segregated path system of linear parks and greenspace, I often think the support is mostly a way to get those pesky non-auto travelers out of the way, the Pedestrian Displacement System, and not necessarily the highest priority of those who bike and walk regularly.

There's a reason that fully separated bike lanes on busy streets are increasingly popular! They offer separation and comfort, but also go to the same destinations you would want if you were in a car or bus.

To focus on only a segregated path system would be a mistake. Coordinated and leveraged passionately with a policy for separated lanes in the existing right-of-way, as well coordinated with a better policy of land uses along the paths, a path system could work well. But by itself, it would solve few problems, and introduce more.

BikePortland has a piece today by a Swede who spent a year in Portland. He's going to return to Linkoping very shortly. Linkoping is a town of 153,000, so that's a Salem-sized city (map here). He notes that about 25% of trips in Linkoping are by bike; Portland is at 6 or 7%, and Salem's about 1.5%. (Maybe we'll come back to Linkoping for some comparison by map.)


To me it seems that a big challenge for Portland – as well as most cities in the US – is the fact that cars have been allowed to dictate the way cities were built for so long. The best examples of the contradiction between the way people want to see their city and the way they behave is the joy and celebration on the streets during Sunday Parkways or Last Thursday on Alberta – only to be replaced by the usual invasion of cars when the event is over....

Some day I hope to come back to a Portland that takes radical steps away from the car centered living we see today. The way transportation works right now just locks people in their cars – when I look at the clogged highways I see so much human and fossil energy go to waste. 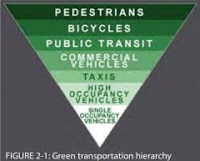 Even in Radburn, the path system is a by-product of cars dictating the urban form. What we truly need is to deemphasize car travel and drive-alone trips.

Increasingly we should be able to flip our usual priorities, to allow walking or biking or busing to dictate the form and pattern.

Cities that have a high percentage of people using bikes have extensive networks of bike paths separated from automobiles. The separated paths are safer for inexperienced riders and so encourage more people to ride. Whether we build bike paths to get bikes out of the way of cars or to encourage bicycling does not matter. If the reason drivers vote for more bike paths is to get the bikes are off the road, that is ok with me.
Bike paths should connect people to popular destinations. That is why the Marine Drive multiuse path would be popular, it would give the people along Wallace Road an better alternative than driving to Roths or downtown. During rush hour, it would be faster than driving. When an opportunity to expand the bike system has dedicated funding, such as the Marine Drive path, we need to implement that opportunity. Please tell your councilors to support building the Marine Drive path.

Added picture of "pass with care" sign at Minto.