If only we attacked the problem of too many cars with the same zealous energy we are attacking the "problem" of too many books. The inversion in priorities says so much about us.

On Monday Council will meet, and they will assess the latest rationalization and modernization scheme at the Library as well as get an update on the recommendations from the Congestion Task Force.

A century ago, local librarians followed "the librarians back east" in advocating for a "natural way" of phonetic spelling. It was the latest and best theory! Keep up with the times!

We all know how this attempt at rationalization turned out.

Now, we have another attempt at a misguided modernization scheme. From here The Big Weed looks like more like high-concept "cotzj chez" than real cottage cheese, and Council should ask for course-correction on this fad.

A resolution from SCAN summarizes much of the case.

A senior librarian, 16 years with the City and with intimate knowledge of internal processes and Salem's usage, writes:

However fusty an attachment to old books might seem, old books are expensive and hard to replace once discarded. (Consider recent fires at Notre Dame and the National Museum in Rio de Janeiro for a catastrophically more intense form of this same kind of loss.) They also have useful information in them, historically illuminating even when the bare "facts" themselves might be out of date. More than this, as the resolution from SCAN suggests, in comparison with peer libraries, in our practices, standards, and funding we are behind or deficient. Our Library's current enthusiasm for weeding seems more impoverishing than improving, and hopefully Council will step in with corrective action.

(Update: Save our Books points out this is an "information item" only, a report on continuing the weeding program, and not an action item asking for Council explicitly to confirm the Big Weed or to give corrective direction. So that's an interesting, even sneaky, maneuver that I missed.)

There's no need to stop maintenance weeding itself, but there is great need for a more thoughtful approach away from the clear-cutting mode.

As it has been easy for the Library to reduce book holdings, it has been difficult for the City to reduce car trips. Sure, books and cars are different, and there is no Roads Czar equivalent in power to a City Librarian. But the difference still is telling.

Council will also get an update on the recommendations from the Congestion Relief Task Force. Already, it's a slog. There are four items called out in the update.
Other Transportation Items

Council looks to set a Public Hearing on May 13th for the recently proposed code amendments with better bike parking. It looks like a modest improvement, but it could have been more. One adjustment made by the Planning Commission is a bummer:

The recent installation at the Saturday Market illustrates ways that lifting over curbs just ads friction and drag to a bike trip. You should be able just to roll up to the racks. Here you have to use the crosswalk ramp, the driveway ramp, or lift over the curb. Even if one lift in isolation seems trivial, instead of systematically reducing the barriers to bike trips, we just pile up the sludge to make them inconvenient and annoying. We are far from making biking and walking trips lovely and the preferred choice for short trips.

Hopefully school advocates, maybe even the Safe Routes folks, will comment on the part of the changes to bike parking that involve schools. The reduction seems concerning, but maybe school advocates have negotiated, and accepted or supported it.

Separately, there is formal adoption of the sidewalk plan. Again, a modest improvement, but it also could have been so much more. (See previous notes here.)

In the administrative purchases by the City there is a $62k contract with DKS for "Design of the Bicycle Signal & Traffic Analysis for Commercial Street SE to Winding Way SE." I hope this is for the wye-intersection with Liberty between Alice and Hansen. It would be very interesting if there was something at Winding Way itself - but this seems unlikely.

There are two matters that deserve closer looks.

Out at the Mill Creek Corporate Center there is a $5.7 million project to "construct wetlands and add graded fill." This is a subsidy that should be added to the other infrastructure subsidy and Enterprise Zone property tax abatements. This looks like an instance of the Suburban Ponzi Scheme in action! It's also evidence that this land isn't great for industry anyway.

The Conference Center remains a mystery. There is a proposal to study further upgrade and expansion:


Authorize the use of up to $80,000 of unallocated Riverfront-Downtown Urban Renewal Area funds for a benefit cost analysis for a potential future expansion of the Salem Convention Center....

The Salem Convention Center (Convention Center) includes an expansion area that is currently used for outside seating and a sculpture garden. Convention Center Management believes a substantial expansion to the facility is needed to accommodate diversity in demand and remain competitive as new and expanded convention centers are entering the regional market.

Based on very preliminary estimates from City staff, Convention Center staff, and consultants, an expansion project would be in the range of $10,000,000 to $12,000,000.

The Sculpture Garden is dead space, and it has not been clear that the Conference Center is the best and highest use for that downtown land, either. An honest study might disclose more about the City's return on investment, however. Clips from 2012 and 2013 City budgets appear to show an operating loss.


But according to a 2013 report, the Convention Center "has operated in the black from the beginning."

The extent to which the Conference Center really adds value or requires subsidy has never been made clear to the citizenry. What has been visible it a steady racheting up of ambition and airs - from "Conference Center" to "Convention Center," for example - and this sounds like another form of the ponzi scheme. If the City committed to the analysis unflinchingly, this would be an opportunity for a kind of real audit. (But of course it could be a Potemkin report also.)

The City has to pay attorneys fees in a public records squabble. Salem Reporter notes "The city recently lost a years-long legal battle to withhold arrest records of a man convicted of child abuse." And combined with the reductions to the City's website and questions about open meetings laws, altogether it's not a good look at all.

In the Legislative positions the City offers cautious support for greenhouse gas reduction and the establishment of a Carbon Policy Office. "The Legislative Committee is recommending the City of Salem support the broad framework and concepts within House Bill 2020."

The City's released the first pass at a proposed budget and it has about $9 million in reductions.
As this winds its way through the process there will be more to say.

One thing, though, that neither this announcement by the City Manager, nor the ones by the Sustainable Services and Revenue Task Force have addressed is our system of subsidies, tax incentives, and other give-aways to business.

What is the revenue leakage here? 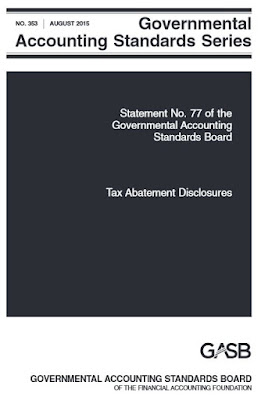 Has the City really embraced this document, "Statement No. 77 of the Governmental Accounting Standards Board: Tax Abatement Disclosures," and in our quarterly "business development" reports shared how much we give away and how effective they really are?  It's been out since August of 2015, and Council should consider asking for more attention to it.
Posted by Salem Breakfast on Bikes at 1:00 PM

(Updated with important detail I missed: The Library item is an "information report," and structured to avoid an invitation to Council for any changes.)