New Auto Section in 1919 Still has Room for Bikes 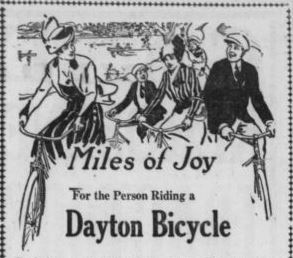 Starting in April of 1919, the Capital Journal expanded the Saturday paper with a large "automobile section." It followed the novel legislation for the gas tax in 1919 and Salem's own first auto show at the armory, which, though it had been delayed a month because of influenza, still came off with success in February. 1919 is something of a cusp for the history of motor transport here.

But this new section is the paper is not yet a "pure" automobile section. On its very first page at the top is an article - probably more like advertorial - for bicycling, "Bicycles resuming popularity of old." You will recognize the name of Harry Scott. Maybe his account books would show a local "resumption," but in general the bike boom of the 1890s had to wait for the Depression and World War II for the second bike boom. (And then there was another lull until the 1970s.) This piece was probably more marketing hoopla and forward-looking than based on a backward-glance at any empirical trend.

On an inside page, there are three bicycle ads - and a Buick ad from our former bike dealer, Otto J. Wilson. (Scott's business is still around, Moore's slightly later building is still here, and Santiam Bikes is in Wilson's building. Ramsden has largely disappeared, however. If traces of the first round of bike dealers in the 1890s are scarce, links to this second generation have endured.)

It will be interesting to follow this new section of the paper. They explain they have a staff person dedicated to both the advertising and editorial sides (not quite the hard wall between them that we idealize today in journalism, and the new realities of journalism may represent a kind of reversion to this other historical norm):


It might be reconstruction and it might be construction, but any way the auto mobile and cycle industry is in high gear. One mighty good way to keep it in high gear is to give publicity to every move that is made along reconstruction lines. There 'is absolutely no reason why Salem cannot be the most enterprising wide-awake, inland city in the northwest. Its wide streets and paved highways have already been widely advertised and with the increasing payroll every year along with prospective in creases to follow, insure the Salem resident of good times and property increases. Now, here is an appeal to the automobile dealers for more publicity.

We have a man, in this office that has spent several years on newspaper staffs and would like very much to help in this publicity movement in this way: Any one of you local dealers would like to have a gasoline mileage test, endurance tour or some other demonstration of your merchandise and also have it published properly. Now this man will be glad to go on just such a ride. As every one knows such tests create contests, and contests create publicity and that's what Salem needs. Don't wait for some one else to do it but do it now yourself. The services of this man are free and arrangements can be made at this office.

At least at this moment, there is not a hard siloing of bicycle and motor transport. At the same time, the big money is in cars, though they remain expensive, and it may be that the bike dealers are trying to keep up more than that they are still direct peers of the car dealers. Still, it was plausible to keep them on the same page as part of the wider mixed transportation ecosystem.
Posted by Salem Breakfast on Bikes at 8:00 AM