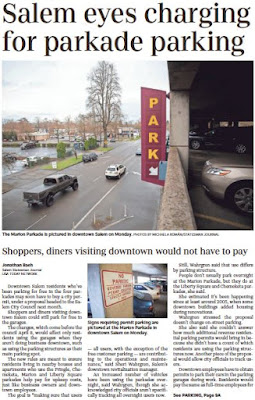 Council meets tonight, and you might recall a front-page piece from a couple weeks ago on proposed changes to downtown parking for residents of downtown.


Downtown Salem is experiencing an increase in private development. Currently proposed projects include a mix of uses including housing, which will increase the demand for on and off-street City parking resources. In addition, future development of the Union Gospel, Saffron sites, and the former Nordstrom Building may also increase the demand for parking resources in downtown.

The Commercial Business District (CBD) zoning district requirement for buildings with housing is one parking space for every housing unit developed. Because it can be challenging with site constraints and financial costs to build on-site structured parking and recover those costs through rental rates, developers are requesting parking adjustments or considering City structured parking resources through an agreement as a solution to meet their on-site parking needs.

Without a paid on-street parking system that would incent utilization of the free off-street parking resources, or a permit requirement for residents currently utilizing the parking garages for long term parking for free, these users are not contributing to the cost to operate and maintain the City parking resources. If the proposed revisions are approved, residents who live within one-quarter mile of the Downtown Parking District boundary will be prohibited from parking in a City garage without a parking permit. This boundary includes Pringle Parkade which is a City parking resource outside of the Downtown Parking District but within the one-quarter mile parameter.

We're just basically incoherent on parking. Separately, in the Legislative positions, there's an argument against reducing parking. The City opposes a bill that would make transit work better and help reduce the cost of new housing:


SB 10 would require the City to increase the maximum density allowed for housing to 50 units per acre within 1/4mile of bus routes with 15-minute service (e.g. Commercial, Center, Market, Lancaster, Broadway) and 25 units per acre within a 1/2 mile. In most cases, this would be higher than the densities currently allowed, though developers rarely build to the current maximum densities due to parking or other requirements. SB 10 would also prohibit the City from establishing parking minimums in these transit corridors

As advocates, the Budget Committee, and Council consider moving forward on a Climate Action Plan, it's increasingly clear we will have to read our debates on parking, on congestion. and on transit in light of our developing understanding of greenhouse gas emissions.

Last week the Advisory Committee for Our Salem met, and one of the preliminary findings on greenhouse gas was striking.

For the whole State of Oregon, emissions from the transportation sector have been rising, from about a third, to nearly 40%.

So it was very interesting to see a city-level estimate: 57%! Nearly half again as big as that statewide estimate!

That doesn't even include emissions from through-travel on I-5 or OR-22, trips that neither begin nor end inside the Salem UGB.

And if we are going to make headway on reducing emissions, the biggest pie slice and biggest potential for reduction is in transportation.

(There will be more to say on the presentation to the Our Salem Advisory Committee.)

Also on Council's agenda is a proposal for expanding activities in the North Gateway Urban Renewal Area.

You might recall a couple of months ago that the North Gateway Urban Renewal Advisory Board was looking at a new list of projects for the next decade. Some of the details were unclear. The matter is now at Council (public hearing also) and a key question about funding and scope is clarified:


The North Gateway Urban Renewal Area (URA) is approaching the end of its funding availability. There is approximately $6 million remaining to be allocated towards future projects, out of the approved $75 million. Due to the current projects and opportunities occurring in the North Gateway URA and expected future growth and development, the North Gateway Advisory Board recommends increasing the maximum indebtedness (amount available to spend on projects) by $25,466,402 from $75 million to $101,466,402.

As the YMCA continues to raise funds and move towards the construction of a new facility, the Peace Mosaic on the Court Apartments, which are slated for demolition, remains imperiled. Council is considering a proposal to


direct the City Manager to draft a letter indicating Council’s support [for preservation and relocation] and that he propose an amount not to exceed $15,000 in the City’s FY 2020 budget to assist the citizen-led fundraising efforts to save the Salem Peace Mosaic.

I'm repeating myself here, while I support charging for parking in the downtown, the acres of free, off-street parking throughout town will only hurt downtown businesses until the number of people living downtown dramatically increases. As it is people will decide that they rather shop where they can "conveniently" drive and park for free. Until we drastically reduce all of the mandated free parking, more charges for downtown parking isn't advisable.