You may recall when the valet bike parking at the Saturday Market shut down in 2011. After that, as before, it was necessary to lock to signposts or go up the street to the North Mall Office building, a block away.

This past season the City installed a pod of racks on Winter Street at Union, and decent bike parking is at the market now. It may be early yet in the season, but put that fact away for when you do want to ride, especially as we get fair weather nearer to summer! 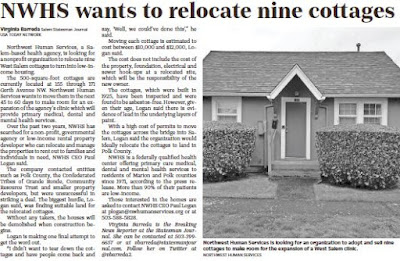 There's an interesting note in the paper today about an offer to give away a cottage cluster just off Edgewater Street, on the corner of Gerth and Second Street NW.


The 500-square-foot cottages are currently located at 155 through 171 Gerth Avenue NW. Northwest Human Services wants to move them in the next 45 to 60 days to make room for an expansion of the agency’s clinic which will provide primary medical, dental and mental health services.

Over the past two years, NWHS has searched for a non-profit, governmental agency or low-income rental property developer who can relocate and manage the properties to rent out to families and individuals in need, NWHS CEO Paul Logan said.

The company contacted entities such as Polk County, the Confederated Tribes of Grande Ronde, Community Resource Trust and smaller property developers, but were unsuccessful in striking a deal. The biggest hurdle, Logan said, was finding suitable land for the relocated cottages.

Without any takers, the houses will be demolished when construction begins.

There are lots of interesting things here:
Maybe there are other angles you will see.

This story, if the paper chose to develop it further, could be a useful lens through which to examine the "Our Salem" project and the impediments that remain to the kinds of development our policies seek to encourage.

In any event, the demolition or the location of these cottages is something we'll follow at least peripherally here.
Posted by Salem Breakfast on Bikes at 8:00 AM

Cherriots Trips Choice, Oregon Department of Administrative Services, and Salem Bicycle Club generously funded this new bike parking at the corner of Union and Winter Street. Located along the proposed Winter-Maple bicycle route, the bike racks were constructed by high school students from Salem-Keizer Public School’s Career and Technical Education Center and installed by the City of Salem.