EarthWise is Mainly about Garbage, Not Carbon Pollution

Our 350.org chapter has the good news on Council's action Monday for a Climate Action Plan.

Over on FB, some have argued that the City already has a Environmental Action Plan, the County already has the EarthWise program, and that a Climate Action Plan might therefore be superfluous. 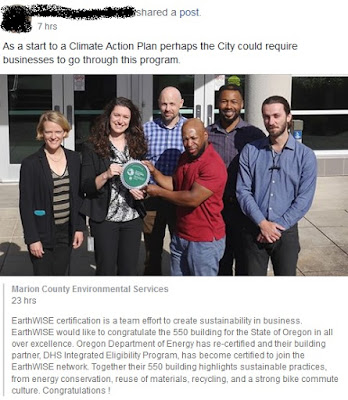 It's possible that EarthWise could be retooled, but at present it is mostly silent on carbon emissions and transportation. In a basic way, Earthwise is not set up for emissions reduction. It's more about garbage and that kind of waste reduction. Indeed, it's operated by Marion County's Recycling group.

Back in 2016, on the assessment forms for certification, transportation was regarded as supererogatory - an extra, a frill, a non-essential component in being sustainable. As an element "above and beyond," it was not structurally considered part of sustainability.

The County has since scrubbed that assessment form from the website, and perhaps things have changed. But in general terms, the EarthWise program misses the biggest source of carbon emissions. (LEED and similar building certifications also miss on transportation.)

As it operated in 2016, Earthwise is not a start on carbon reduction, and the City should be very careful about any move to try to leverage it as a carbon strategy.

More than this, the Earthwise program might actually be a distraction from what really matters, a project that reinforces the status quo more than it causes change. At Vox an activist wrote, "I work in the environmental movement. I don’t care if you recycle: Stop obsessing over your environmental 'sins.' Fight the oil and gas industry instead." The micro-scale of recycling may distract from the macro-scale of carbon pollution. Small consumerist decisions by individuals do not attain that scale that is necessary. We need system change.
Posted by Salem Breakfast on Bikes at 7:00 AM

I remember, as a third grader in end of the 60s, the lesson was about the “Environment” and even as a dumb kid, I remember thinking “All they talk about is gum wrappers, I don’t think gum wrappers are the problem” (I knew we had rivers in Ohio catching fire, etc.)

That was just the first time I observed herds of authority figures trying to get me to focus on the trivial thing that I could do differently and claim as “my part” while the world degraded around me.

So reducing your waste at work is not reducing the carbon footprint? How is not wasting paper, wasting electricity and wasting buying materials made from recycled products not helpful to the environment. Didn't the creation of those products that are consumed creating carbon pollution at some point in their production and delivery? And of course here in Marion County when the waste is incinerated it produces GHG pollution.

The EarthWise program is not enough for sure and needs to be added to a lot of other programs, but it is a start...or a least a piece of the solution.

Let's start as a community to work together rather than criticizing even the smallest of efforts. Some people like to discredit any program that is small as not good enough. Of course we need systemic changes too. But as Jane Goodall points out, if everyone did a little, it will add up to a lot.

I have been asking for some examples of practical policies or programs that can make a real difference. I need to do a lot more research but so far all I read is about what won't work. Way too many of us can't afford to buy an electric car and power it off our of solar panels. And many more people can't ride a bike or take the bus. So, I look forward to some ideas that would work for the majority of people.

You may misunderstand a basic point. Nothing here says "Earthwise is bad and we should stop it."

Not wasting paper is valuable for any number of reasons. But making it the centerpiece of a carbon reduction strategy is misguided.

As the County has consistently engaged in climate denial at the MPO, for example, it may be convenient for the County to point to programs like Earthwise and say "see, we're doing enough already." This is a way that focus on recycling might be a distraction from the real goal.

As for practical policies? Here's one: HB 2001 and missing middle housing. See this recent piece, "A Duplex, a Triplex and a Fourplex Can Cut a Block’s Carbon Impact 20%. The carbon savings from 'middle housing' are voluntary, self-financing and immense. So why are they illegal?"

Raising the gas tax and creating a carbon tax, of course.

You create a straw man by saying things like "many more people can't ride a bike or take the bus." But not everyone has to. Transforming an argument from "more people should do x" to "all people must do x" is sophistry! This all-or-nothing-ism is a tool for shutting down debate and engagement. Right now our bike commute rates is something like 1.5%. Getting that to 5% or 10% would be real. It doesn't have to be 100% or 75% or some number that I would agree is ridiculous! Many solutions don't have to be adopted by "a majority of people." If we get overlapping solutions that are adopted by 10% of people, those changes in aggregate add up. And they start building on each other.

As you assess "practical policies," don't think about things that "everyone" needs to do. But also, don't just think of individual, isolated voluntary changes. Think of system changes with proper incentive structures that will engage chunks of 5% or 10% of people.

FYI, we are not disagreeing. We are just looking at the situation from a different view. I was everything you say, but I also think people need practical ideas that they can do as individuals. EarthWise is just a small piece. It helps, but of course not enough. We need more.

We also agree about the Marion County Commissioners who are deniers and do not adopt good policies to help the environment. But there are some good staff who do pretty good job in spite of this constraint. I listened to the commissioners talk about the WTE incinerator and knew they were clueless and did not care about the environment...and the people who live here.

I guess I was thinking we could start with something that exists and build on it. But maybe not.