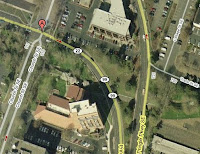 On Monday at City Council, Minto-Island Park is the big issue. But the City also has a couple of small transportation related issues on the agenda. One is a proposal to initiate proceedings to vacate a strip of the greenway running through the Pringle Parkway.

The owners of Park Place (the building on the top edge of the photo) wish to expand their parking lot south into the wedge between the two arms of the Pringle Parkway.

The parcel in question is shaded in this survey drawing. The millrace is culverted here and runs below the Parkway before emerging again in front of the Pringle Creek tower and the SAIF complex. Parallel to the millrace is a pedestrian and bicycle underpass that provides a twisty crossing below both arms of the Parkway. 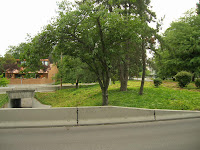 This photo is taken from the eastern arm of the Parkway, very near where the millrace is culverted, and shows the below grade crossing under the western arm of the Parkway. The parcel to be vacated is landscaped with trees and ivy. Though it is part of the Trade street right-of-way, it is an inactive part of the streetscape. The stretch of path and greenway between Winter and Church (Willamette Law School and SAIF), is isolated and barren (except for the ivy!), not very pretty, and few use it. Some also have safety concerns about isolation and lack of visibility in the sunken areas.

While Willamette University doesn't own this parcel, their new Master Plan shows interest both in the Mill Race and in the multi-use path that parallels it.

"Depaving" projects are becoming more and more popular as people learn about the problems of impervious surfaces, stormwater runoff, and climate change. Moreover, policies should be encouraging fewer single-occupant vehicle trips. Selling off greenway land to permit more asphalt parking lots is not consistent with these values. We will follow this.

If Council approves the proposal, it will merely start a public hearing process. But wouldn't it be great to improve the greenway rather than to delete a chunk of it?

The city also proposes to dedicate new right-of-way on Liberty south, just north of Ewald, in a deal with Westminster Presbyterian Church. This is a piece that would make it easier for this section of Liberty to be widened some day.

Finally, there's the Minto Brown flood remediation. It does not affect the multiuse trails in the park nor the ability of the city to build a bridge between the park and Riverfront park. The City's website has a page about it, which includes a link to a Q & A, as well as to the 1995 park Masterplan. LoveSalem offers arguments against the project.
Posted by Salem Breakfast on Bikes at 9:00 AM

What did the Council decide on the Pringle parcel?

Council voted to initiate the process - so public works will draft a staff
report and schedule a public hearing. It's at least two-three months
down the road it sounds like.