Take a Joyride for a Pleasant Weekend Read

We're in the third year of counting bicycle traffic in Salem, and it's not always easy to draw solid inferences from small data sets. One of the early suggestions from helmet use and gender splits, is that Salem is about 10 or 15 years behind Portland, where there's almost 20 years of data.

Just last month, Mia Birk has published her memoirs. Joyride: Pedaling Towards a Healthier Planet recounts her tenure as Portland's Bicycle Coordinator during those formative years in the 90s.

If Salem is indeed 10 or 15 years behind Portland, her struggles in the 90s should resemble Salem's struggles today. And it turns out there are some interesting parallels.

(Whether across all cities there really is a constant trajectory of increasing bicycle use is not certain, and perhaps unlikely, so it's best not to press a model too hard. Nonetheless, the parallels also suggest ways that Salem can capture some of the Portland mojo and avoid some of the Portland potholes.)

Many of the parallels are in plain view. A core problem is that of connections across the Willamette river. Salem struggles with many of the same issues, and it's clear that solving them is absolutely critical. 15,000 bike trips a day are made across the Hawthorne Bridge, approaching a fifth of the total vehicular traffic. The hills of West Salem complicate this, but Salem should be making a greater effort to make it easy for people not to drive across the bridge. Another is business resistance to people on bikes. But pitching the case for bikes to business hardly differs from city to city - it just has to be done! 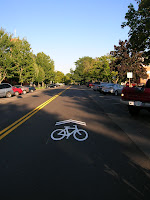 One place where we aren't lagging is with sharrows! In part because of Birk and Portland's work, sharrows are appearing in Salem, and here the cycle is considerably shorter than 10 or 15 years.

The memoir also has a great Salem angle. One of Birk's stories is about the inaugural Bridge Pedal event. Getting the final permits for the Interstate bridges proved difficult, and the charisma and persuasive salesmanship of a colleague named Eric Fishman was critical in securing the permits from ODOT.

Fishman, it turns out, has some roots in Salem! While a student at Willamette in the 80s, he started The Bistro, a student-run coffee shop, now at the epicenter of campus life. He went on to a career with the Metropolitan Group, and is now a trustee of Willamette.

Makes you wonder what great things the organizers of the Bike Shop will accomplish!

In the end there were three great lessons for me. First, the importance of having someone in city government. Salem doesn't have a bike coordinator, and we need one.

Having someone on staff designated as bicycle coordinator can be crucial.... (Remember, it is a cardinal rule in every bureaucracy that any task not specified as someone's job is a task that will never get done.)

After things don't work out for the first of many times, she writes about frustration and challenge:

Chalk one up for utter naivete. In a few short months, I've discovered how far we have to go within my own agency, other city bureaus, the business community and the public at large. Nothing but challenges, day in and day out.

The importance of persistence and the long arc:

It has taken close to a generation to teach people to place their bottles, cans, paper and plastic in recycling bins. It will take a generation or more to integrate bicycling and walking into daily life, but only if we get rolling.

It turns out that it's not enough to adopt a Bicycle Plan, building code, or maintenance practices. We've got to retrain all the humans involved, both inside and outside government. Otherwise, all we've got is words on paper.

Interesting post. I was riding to visit Saffron the other day -- a truly great locally owned hardware store -- when I was distressed to find that the bike rack that was removed for the Commercial St. redo had not been returned. What's up with that?

And a city bike coordinator could honcho ensuring that every business with a store front has, at the very least, a staple rack or two. Although I love Saffron, they have no bike parking at all.

Rode by Chemeketa and Commercial today and the staple rack has been returned in front of the Union Gospel Mission office -- no bike racks in front of Saffron though.

But, speaking of why we very much need a real bike advocate on city staff:

What the heck happened on Center St in front of the State Hospital???

You're riding back from, say, Fresh Start Market in a bike lane and then, boom, at Park St. there's no bike lane until you clear the light at the bottom of the hill and the road is narrow with a high curb and no shoulder.

How in hell did that get approved?

Re: Bike Parking. When the racks first started being reinstalled, they were using regular hex nuts. I asked about tamper-resistant hardware, and the City agreed that was a good idea - but getting the hardware may have slowed down the process. It is my understanding the racks will be reinstalled. Will confirm, though.

As for Center street - Well. Sounds like a blog post to me! I'll go by there over the weekend, take pix, and try to learn more. The road work may not be complete. I have a hard time thinking that the bike lane gap is planned and permanent. Thanks for sharing that!