A Long View: The Meaning and Return of Rail

Entwined with notions of technology and progress, transportation policy tends to look forward. And when it gazes backwards, it looks to Eisenhower, the Interstates, and the rationalism of the arterial-collector-local street hierarchy. Policy discussions invoke rails, streetcar neighborhoods, and grid systems, but do so sometimes without a rich understanding of their history. It's a policy discussion, after all.

So it is with bittersweet pleasure to read Tony Judt's reflections on rail.

Tony Judt was a distinguished historian of modern Europe and died of Lou Gehrig's disease this past summer at the age of 62. He wrote extensively during his diagnosis and decline, the last two years of his life, and the New York Review of Books is still publishing his essays. The most recent, the second half of a two-part essay, is from the January 13th issue, and is on trains. (The first half of the essay is here.) 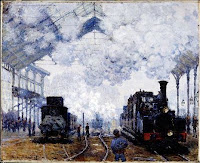 More than any other technical design or social institution, the railway stands for modernity. No competing form of transport, no subsequent technological innovation, no other industry has wrought or facilitated change on the scale that has been brought about by the invention and adoption of the railway....

We no longer see the modern world through the image of the train, but we continue to live in the world the trains made. For any trip under ten miles or between 150 and 500 miles in any country with a functioning railway network, the train is the quickest way to travel as well as, taking all costs into account, the cheapest and least destructive. What we thought was late modernity—the post-railway world of cars and planes—turns out, like so much else about the decades 1950–1990, to have been a parenthesis: driven, in this case, by the illusion of perennially cheap fuel and the attendant cult of privatization. The attractions of a return to “social” calculation are becoming as clear to modern planners as they once were, for rather different reasons, to our Victorian predecessors. What was, for a while, old-fashioned has once again become very modern.

In between the holidays, go read the pieces here and here! He writes about the relation of the industrial revolution, business organization, and urban growth in historically informed way. It's a rich perspective on modernity and the way travel and mobility is part of it.

Railways were born of the industrial revolution—the steam engine itself was already sixty years old when it acquired wheels in 1825, and without the coal that it helped pump to the surface the steam engine could not work. But it was the railways that gave life and impetus to that same industrial revolution: they were the largest consumers of the very goods whose transportation they facilitated. Moreover, most of the technical challenges of industrial modernity—long-distance telegraphic communication, the harnessing of water, gas, and electricity for domestic and industrial use, urban and rural drainage, the construction of very large buildings, the gathering and moving of human beings in large numbers—were first met and overcome by railway companies.

(Image: Claude Monet, The Gare Saint-Lazare: Arrival of a Train, 1877; Harvard Art Museum/Fogg Museum)
Posted by Salem Breakfast on Bikes at 9:15 AM

The book Waiting on a Train: The Embattled Future of Passenger Rail Service by James McCommons was published just over a year ago. The book describes the past and likely future of passenger rail in the U.S. James stopped in Salem last May on his book tour. I recommend it. - Jeff

Thanks! Totally forgot about this book. Tom Vanderbilt has a nice little piece on the book and why 20th/21st century train service is much, much worse than 19th century service!

Looking at train schedules he says, "But the most striking aspect of these antiquated documents is found in the tiny agate columns of arrivals and destinations. It is here that one sees the wheels of progress actually running backward."