This week at council some of the most interesting items are in the Legislative Committee Report. (One bill will get a separate note.) The City also published the preliminary Capital Improvement Plan. And a couple of parks developments look promising.

The city proposes to apply for $425,000 to develop Kale Park and seeks to approve plans for a walking trail at Wallace Marine Park. 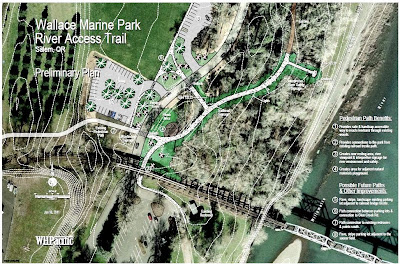 See the legislative committee's positions as well as a closer look a the Capital Improvement Plan after the jump.

Despite the fact that ODOT recommends against studded tires, and does not use them for their own maintenance fleet, the City would be neutral on a ban of studded tires:

The use of studded snow tires contributes to millions of dollars of damage to road pavements each year statewide....The City of Salem is spending sizeable amounts of funds to repave arterial streets, whose pavement lives would have been extended without damage from studded tires. Despite the damage caused by studded tires...the bill needs to be amended to exempt state, county, and municipal maintenance fleets from this prohibition so that our snow and ice response vehicles can have the safe traction that they need to complete deicing and sanding operations.

The committee looked at Senate Bill 604, which has been publicized as a shell for a gut-n-stuff. They took a position on it anyway. They also didn't ask any bicyclists about why it might be a good idea. What to say? The City might still reasonably decide to oppose it, as there remains a range of opinion on it among bicycling folks, but the City sure could do a better job with process and outreach. In the context of the other positions and projects, it comes across as unnecessarily anti-bike.

(For complete and up-to-date information on legislation, see the weekly updates here.)

The Preliminary Capital Improvement Plan is out for 2011 - 2015, and the City proposes to hold a hearing in April. The CIP, as it's called, is

a five-year plan for financing major public assets based on City-adopted master plans, goals and policies. The purpose of a CIP is to match scarce financial resources with the capital needs of a growing community and to preserve or enhance existing capital assets to provide efficient city services.

Note the $70,000 per year budgeted for bicycle and pedestrian infrastructure from the bicycle bill.

And here is just the transportation funding sources broken out.

Here's the spending by category.

Note an average of almost $800,000 per year on parking structures.

I couldn't find any surprises in the CIP - and I wasn't expecting any - but it's interesting to see all the projects together and to see the relative weights assigned to each.

There's details on a plan to connect Swegle and Market streets at Swegle School. On the one hand, Swegle School will no longer directly front Market street. On the other hand, the move from 90 degree corners to a sweeping curve will encourage higher speeds and more through-traffic. Not sure what to think about this. Perhaps others who live nearby will have a better analysis.

And a proposal to ban skateboards at the Senior Center. And, you know, the senior center's probably not the best place for skateboarding...it's hard to argue with that, though hopefully this doesn't become a precursor to cracking down on active transport more generally.
Posted by Salem Breakfast on Bikes at 10:00 PM