City Council, March 28th - Lords of Dogtown and the 50+ Center

Apparently the Senior Center has a skateboarding problem, and that's the most transpo-relevant agenda item on this week's Council meeting.

Tony Hawk's still in his 40s, but the Lords of Dogtown and the Z-Boys would be eligible to use the 50+ Center. Ha!

Presumably, though, the problem is with the younger set.

It's not difficult to imagine that skating inside on the center grounds is inappropriate. Nobody needs a broken hip. 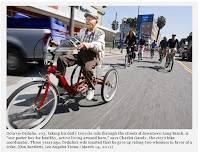 But would the proposed ordinance impact transportation in front of the Senior Center? And what message does it send about active transportation? Remember Octavio, who still bikes at 103?!

The ordinance language isn't obviously clear, but the staff report is less ambiguous:

4. Skateboarders also utilize the sidewalks along the front of the building and the surrounding handicapped parking spots. This places both seniors and disabled patrons at risk of being hit and injured by skateboarders.

This suggests that the ordinance might also prohibit skating on the sidewalks along the Senior Center.

If you skate or know someone who does, the ordinance and process might be worth poking into.

While it is certainly true that it may not be appropriate to skate in certain places, in general the solution should be to encourage more skating and more polite skating - not to marginalize it further.

When the City decides active transportation is inappropriate somewhere, it should give thought to encouraging it elsewhere - fair and balanced!

The "I love me" heart-logo, after all, looks a lot like a hand plant. Just sayin'...

I appreciate the perspective and welcome the deeper conversation.

50+ and Skaters: Can't we all just get along? I can see many possibilities.