With the bike racing on State and Court streets today, it seemed like a good time to toss out an idea that's rattled around some.

Court and State Streets are scheduled to be rebuilt and restriped in 2012, and current conditions make it possible to consider making Church Street two-lanes in the downtown core and reallocating space more generously to share with all road users.

For the length between Church and Front Streets, State Street has three lanes, the third of which, on the right or north side, cannot really be used. The temporary bus mall uses it now between Church and High; between High and Liberty it is a right turn only; between Liberty and Commercial it is orphaned and cannot be entered directly because of the preceding turn lane; and between Commercial and Front State is two-way. 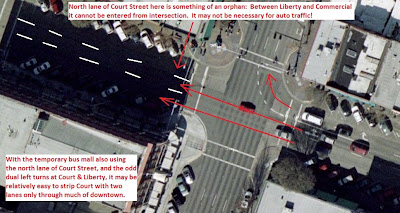 Here's a detail of the intersection at Liberty and Church.

It appears here that traffic volumes do not require three full through-lanes of auto traffic.

There's an opportunity here to rethink creatively the road surface, lane assignments, and striping plan. Sidewalk expansion? Cycletrack? Pocket park? Even if you don't touch car parking, there are lots of possibilities! Let's get creative.
Posted by Salem Breakfast on Bikes at 9:00 AM