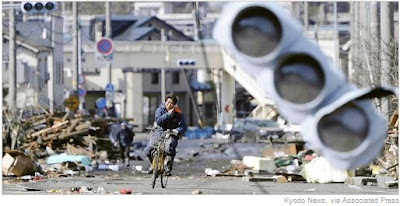 Building codes and emergency preparedness in Japan might be second to none. And yet the earthquake's devastation is shocking and enormous.

Oregon is also on a subduction zone, and we are due for a large earthquake ourselves.

According to the Japan Times,

Bicycles sold like hotcakes at supermarkets and bike shops after Friday's megaquake shut down train services in the Tokyo metropolitan area, attracting local residents — and people from farther afield — who wanted to cycle home instead of facing the prospect of walking for several hours.

Having a bike, knowing how to ride and maintain it, knowing how to haul cargo with it, having large numbers of bicycles available around the city - these can be important parts of disaster readiness. Another good reason to support bicycling today.

More at Cyclicious.
Posted by Salem Breakfast on Bikes at 11:00 AM

Thanks for the link love.

I didn't mention it in yesterday's post, but in the aftermath of the 1995 Kobe Earthquake, my dad and his team were among the first aid workers to arrive in Kobe from outside of the city. They rode trains as far as they could with their supplies, then paid cash for bikes and cycled their way into Kobe. My dad was a VP at Motorola back then and he and his workers hauled portable cell phone base stations into the area, along with water and food.