The Vision 2020 Bike/Ped Workgroup has been quiet this winter. Much of the activity is focused on the Sustainable Cities initiatives and the Bike/Ped plan updates. So today's March meeting is canceled.

But April is on and it looks interesting.

A couple of weeks ago, City Council approved a downtown circulation study. It has its origins partially in a TGM grant proposal from back in 2009. That didn't happen and it morphed into the study that was ratified as part of the Downtown Strategic Action Plan. 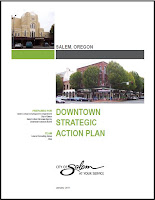 On the agenda for the April Vision 2020 Bike/Ped Workgroup will be a discussion of the scope for the study:

The Central Salem Circulation, Access, and Mobility Study is intended to evaluate a wide range of transportation issues affecting Downtown Salem, including vehicular circulation, street design, bicycle and pedestrian circulation, sidewalk connectivity, use of alleyways, transit circulation, and other issues. This study will consider these issues in an area roughly bounded by Market Street on the north, 14th Street to the east, Mission Street to the south and the Willamette River to the west. Traffic counts to support this study are being collected in April. We are seeking your input to refine the questions that the study will address.

There's lots of potential here. The thing I'm most excited about is double-edged: It's a general traffic study.

On the one hand, people on bikes are still a very small proportion of total downtown traffic, and with counts in April, an already small number of people will be undercounted. If we want to know about "peak volumes" the summer would be better. Even so, as a total percent of traffic the difference will pretty much round to zero, because downtown is generally so forbidding to people on bikes. The proportion is small, no matter how you slice it. Either way, people on bikes could get ignored.

So why am I excited? Because I am persuaded that traffic, like most things, is a complex system, an ecosystem of sorts, and that when we simplify it too much, rely too much on theory, we get bad traffic models and bad road engineering; we get single-use urban renewal that empties at 5pm and is desolate on weekends. Theory tends to simplicity. Simplicity looks good on paper, but in life the too-simple is usually dead. Life is often gloriously messy and requires complexity.

By not carving out a separate study for people on bike and on foot, there's a chance, not a certainty of course, but a chance that non-drive-alone mobility will be considered as a vital ingredient to downtown and not merely as optional icing on the cake - or worse, lipstick on a pig. Instead of creating a parkway, and then shoehorning mobility for people on foot and on bike into it, maybe an organic approach to complete streets will prevail. Instead of focusing on parking and cars - focusing on machines and dead space - we can focus on the mobility of people, who want to use different ways, including cars, but not exclusively cars, to get around.

So there's an opportunity here! 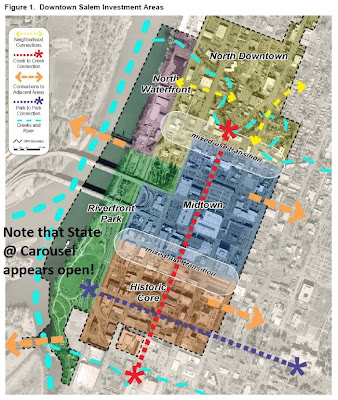 Also interesting is the map, which appears to show a continuous connection along State Street to the Carousel! Maybe they'll ditch the idea of closing State Street at the tracks!
Posted by Salem Breakfast on Bikes at 7:00 AM