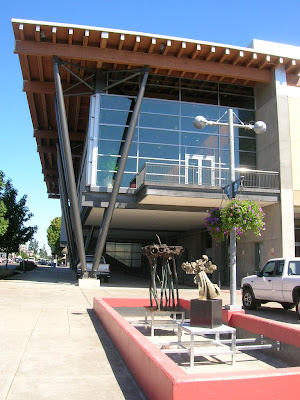 You may have seen the piece in the Statesman about the new sculpture garden at the Conference Center. This is a snap from the installation. One of the items on the City Council agenda is a proposal to expand the Riverfront-Downtown Urban Renewal Plan to include "Public Art and North Downtown Redevelopment as urban renewal projects."

The north downtown zone is bounded on the south by Union Street, and would help activate the bridge and that area. One of the class of approved projects would also include:

Pedestrian/bicycle way connections and streetscape within the North Downtown area, providing linkages to other areas of the City including Riverfront Park, Mill Creek, and along the waterfront that capitalize on the scenic, natural, and recreational facilities of the riverfront and to provide opportunities for the residents in the community to have both visual and physical access to the riverfront while allowing for the continuation of existing businesses.

Going from lovely rhetoric to concrete is not always straight forward, but this is good to see.

There's also a demonstration grant project for downtown and a proposal to reallocate historic preservation funds from Fairmount to the Grant or other neighborhoods. Fairmount neighbors were not in favor of establishing an historic district, but Grant may be. With the development on Broadway as well as the parking study, there is much promise in the Grant area!

An interesting criticism of that development, however, is buried the report on the Neighborhood Center Mixed Use Zone. A citizen writing to Council with concerns about the zoning says that the Broadway developer admits it was "essentially a financial failure." Without more detail it's not clear what this means. We have read about the difficulties of Salem Cinema, for example, and there may be other factors in play. It would be good to know more about where the targeted investment has been successful and where the market subsidies have failed. That neighborhood has so much promise in the city, it's important to make it work! Some feel tax-increment financing is being overused in some communities (see the vote in Clackamas County for example), but at the same time it seems like it should be a tool for good uses.

Also important is a report on the Council Ward Redistricting. One notable change is that the close-in flats of west Salem would be included with downtown in Ward 1. That would make connections across the river and the close-in downtown environment - the old streetcar grid - in one ward. That makes sense, especially from a transportation standpoint.

Then more stuff - second readings and old business by now - on the downtown Economic Improvement District and bank drive-throughs.
Posted by Salem Breakfast on Bikes at 10:00 AM