Vision 2020 and First Day of School

At the Vision 2020 meeting we learned the "you are here" locator signs will be installed later this month! The other wayfinding signs are a ways off yet.

City Traffic Engineer Kevin Hottman asked the group about this dashed bike lane and additional uses in the city. NACTO calls it a "combined bike lane/turn lane." In instances where there's not room for a through lane + bike lane + turn lane, and additional right-of-way cannot be gained, he wondered if there were other places in the city where a through lane + overlapping bike lane and turn lane would be appropriate and useful. Most agreed that it could be a helpful incremental improvement. 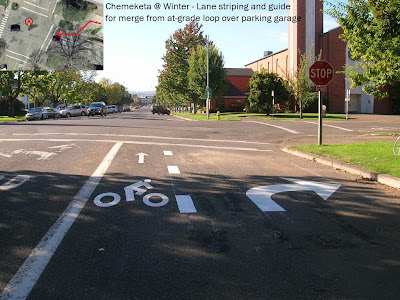 Do you have ideas on intersections where this kind of would be useful?

We also got an update on additional bike parking at the Market Street Park and Ride Transit Stop (at the corner of Hawthorne), and news that next summer the east crosswalk at Winter and State would be opened and the curb cut widened so that people on bikes going north can get more easily to Willson Park and continue north on Winter.

Though Public Schools started, the College of Law at Willamette's been in session for a while - and they've already got a bike parking problem! The racks are full and bikes spill over into inconvenient areas. Hopefully they'll solve the problem with an increase in bike parking, not in draconian lock-cutting. Less car-driving = good! 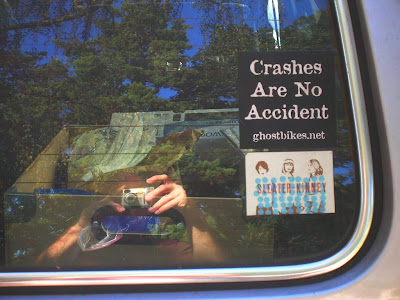 Not far from campus, this combination of stickers for Sleater-Kinney and Ghostbikes suggested they weren't from around here. Indeed, the plates were out-of-state.

Over at South Salem High School, the bike rack was full, but so was the intersection and car queuing zone. These are high school students!

Did you have any particularly rewarding or disappointing first day experiences?
Posted by Salem Breakfast on Bikes at 7:00 AM

Bicycles were overflowing at the Willamette Law School after only a few days in session. Is it my imagination or does the light at Trade and Winter really not pick up the existence of bicycles? This would be odd since I see so many fellow cyclists using this route to downtown and beyond. (Probably many of them are Willamette Law School students.) It seems that whenever I am traveling towards downtown the light does not switch to green unless there is a fellow traveler, via car, waiting at the intersection. It’s never a problem in the afternoon when the intersection is crowded with cars.

As to schools – Yes, there is an entire legion of parents who drop their children off at the door. Parents complain that the elementary school drive up areas are too crowded and should have been designed better on the 1950s and 1960s. The reason - many were built during an age when children walked or rode to school. Are folks still wondering why there is so much childhood obesity?

Sometimes it helps to get over the loop or whatever and tip your bike - or for the camera activated ones (which are supposed to detect bikes but either don't, or do and then make sure the bike has to stop anyway) - on the camera ones it *sometimes* seems to work to get out in the middle of the lane and weave like a downhill slalom skier.

There's something you don't hear often from bicyclists: "It's never a problem.. when the intersection is crowded with cars." :-)

Here's a more detailed discussion of the different ways to trigger a traffic light. I can't remember whether Trade and Winter has a video detection camera. It's also possible that the light is on a fixed timer with priority for east-west travel on the parkway. Sometimes signal cycles don't allow for an interrupt.

Mission and Winter, for example, is on a 120 second cycle, I believe, and people crossing from Bush Park to Winter street have to wait the full 2 minutes for the east-west priority cycle on Mission to finish.

I fully support shared lanes anyplace there is not room for both a bike lane and a dedicated right turn lane. I'd much rather cue up behind a right-turning autoist than expose myself to a right hook.

A few years ago, the BTA proposed allowing right turning autoists to use the bike lane, but backed off after getting creamed by other cyclists.

In addition to shared lanes as depicted in the photo, skip striping near intersections could be used to indicate that motor vehicles are allowed in the "bike lane." Where else but with bike lanes would the traffic engineers create situations in which traffic in two adjacent lanes can continue straight or turn right?