Dick Hughes tweeted yesterday that the City intends to award the Salem Downtown Partnership the contract to administer the downtown Economic Improvement District. Go Downtown Salem, which operates First Wednesday and Summer in the City, has been the administrator.

I think that a formal decision to continue the EID is yet to be made, so it is likely this is not yet final. But as Mike Herron says over at The Slog, "this is a pretty big upset." Hopefully he and others will add more commentary and analysis. 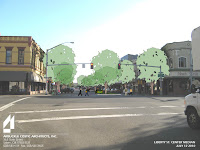 It's also interesting because while the Partnership has made a big deal about free parking, calling it "our lifeblood," you may also recall that the group last fall unveiled a conceptual plan for traffic calming and pedestrian medians for people who would like to walk more downtown - "where the pedestrian is king!" they say. Plans included a large planter strip in the middle of Liberty between State and Court streets.

So there are some different and interesting ways to think about mobility on the table, and the partnership could very well be a lab for innovation and a place for lively debate and conversation about ways to get around.

This is an exciting development for downtown and it will be interesting to see how it plays out.
Posted by Salem Breakfast on Bikes at 11:30 AM