The Salem Downtown Partnership has a Customer Opinion Poll! 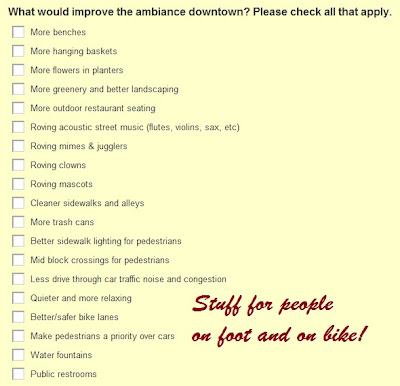 Click through to take it and let them know you care about downtown. 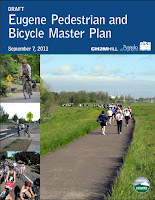 Also, via the BTA MotherBlog, is news that the Eugene Bike Plan is also out. They have been doing an update mostly concurrently with ours - though a few months ahead of us. We can compare the two!

One thing that immediately stands out is that it has a high-level vision and strategy that we don't:

“Eugene is a place where walking and biking are integral to the community’s culture, where the city’s livability, sustainability, and overall quality of life are enhanced by more people walking and biking, and where these activities are safe, convenient, and practical options for everyone.” - Vision statement from the Eugene Pedestrian and Bicycle Strategic Plan 2008

Goal: By the year 2031 Eugene will double the percentage of trips made on foot and by bicycle from 2011 levels.

Performance Measures:
- Percentage of trips to work in Eugene made by walking and bicycling as measured by the Census Bureau’s American Community Survey.
- Annual bicycle and pedestrian counts performed by the City of Eugene.

After tonight's meeting we'll know more about where the City and consultant team plans to go with the final draft.

(Oh yeah, if you really want to compare, the Center for Transportation Studies at PSU is on Friday at noon having a talk on Seattle's bike plan, and emerging trends in developing and implementing them. The CTS site is annoying, so here's the note at Portland Transport. It's webcast, so you can tune in from Salem.)
Posted by Salem Breakfast on Bikes at 7:00 AM