Fall, Safety, and a Conversation about Crash Investigation and Enforcement 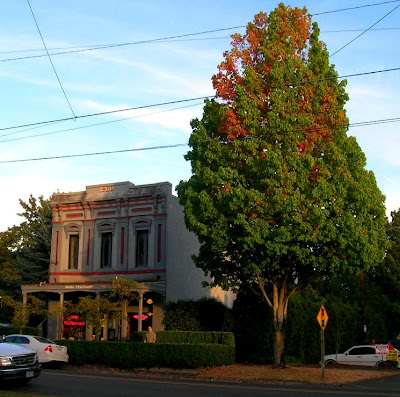 When the heat and sun disappeared last week, it seemed like fall was here. But when I saw the leaves a couple of days ago, I was sure. Yup, fall's here - and today's officially the first day.

And be sure to think about bike lights, rain-slicked roads, and glare from the angle of the sun during rush hour!

While the road wasn't slick for this crash a couple of days ago, the driver on the left, in the Honda, was cited for failing to obey a traffic control device and for driving uninsured.

Last year at the Bike Summit, Doug observed that 40,000 people a year in Oregon are convicted of driving with a suspended license.

It's far from clear that people in cars are paragons of rectitude! But it's the image of the the outlaw bicyclist that has traction.

Doug and Jen are starting a conversation with the Marion County Sheriff about the ways people on bike may not have access to the same level of enforcement and justice that people in cars enjoy. Sometimes, at least anecdotally, there seems in a crash investigation to be a bias in favor of people in cars over people on bike. Moreover, ticketable motorist actions that threaten people on bike are sometimes ignored where more enforcement might be helpful to all for overall road safety. Doug and Jen would like to change all that!

They'll be at the Governor's Cup on Tuesday at 11am to talk more about the project. Please join them if you're interested to learn more and help out.
Posted by Salem Breakfast on Bikes at 7:00 AM

I biked past that crash. It made me think how we take this type of danger in our stride all the time, while being hyper-sensitive to all other risks. It is a delusion we seem to need to keep going... and will likely do so as long as the auto is as much a symbol of personal autonomy/signifiance as it is a means of transportation.

How about ticketable offense that threaten even *more* vulnerable road users like pedestrians? Ever stand at a crosswalk and watch all the SUV's blowing red lights?

What needs to stop is the car culture worship of itself.

Personally, I get way more cranky when I am on foot than when I am on bike. So yeah, totally support more enforcement action on behalf of people on foot!

And yes on the pernicious influence of the idolatry of cars!